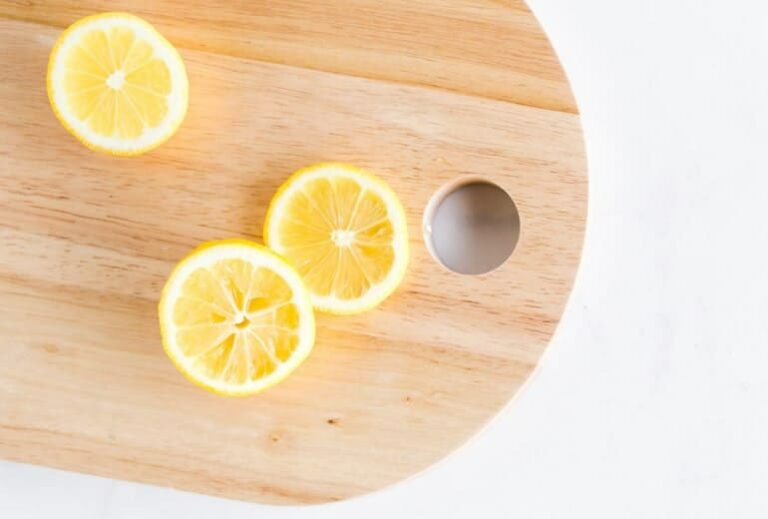 My grandma was a badass. Really, she’s the reason I’m here.

I don’t just mean she’s the reason I was born (also true).

What I mean is, she’s the reason I ditched 21 diagnosed diseases and 70 pounds, became a cancer and wellness researcher, and helped my dying “Failure to Thrive” baby end up a 6’3” All-State MVP pitcher.

And she almost died when I was only 15. I would have very few memories of her, had it all ended there.

I’m going to share with you a really practical recipe she taught me, that I think will help you. It has helped at least three Romney generations kill viruses that antibiotics won’t touch, as well as help us avoid antibiotics for bacterial infections. We call it “Mums’ Magical Antiviral Hot LemonAid Tonic.”

Before I get into this magical antiviral hot drink she made, which has helped me knock down, oh, 200 viruses and bacterial infections over the course of 50 years of life and raising 4 kids for 25 year, may I tell you just a bit about this incredible woman? 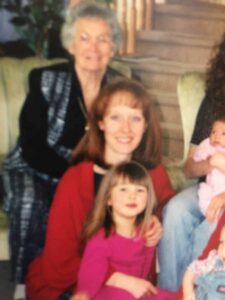 My grandmother, Eleanor Brown Romney, was matriarch of the family that spawned Michigan’s famous governor, a runner-up for American President (Obama won instead), and yours truly. We called her Mums. She hated the name “Grama,” thought it was pedestrian.

We owned the Romney Produce Company, headquartered in El Paso, which distributed produce all over the Southwest from giant warehouses of lettuce, almonds, watermelon, and more.

(Most of us worked in the warehouses at some point. It was hard work, but if you dropped a watermelon, the rule was, you got to eat it, so it had its perks.)

Mums was Mormon, so she never tasted alcohol in her life, and because we always had more produce on hand than we could eat, she ate a mostly plant-based diet. (This is also true of my mother, me, and my own daughter. Our family was recruited to be in a large study of families who have never had a single incidence of heart disease.)

But my grandmother had a few risk factors, too.

First of all, Eleanor/Mums came from a childhood of horrific physical and emotional abuse, and her mother died suddenly when she was 14. Nowadays, evidence shows that unresolved trauma, lack of forgiveness, and unresolved negative emotion can as disease-causing as a crappy diet.

Mums was also a Dr. Pepper addict. Back then, we didn’t have volumes of published studies showing how drinking gallons of acid would eat our gastrointestinal lining and put us at risk for cancer, among other things.1

In 1981, at the age of 52, my grandmother was diagnosed with Stage III malignant melanoma. The cancer on her arm had tentacles all the way to her lungs and liver, and doctors told her it was in her lymphatic system and breasts.

She said no to chemo and radiation, even though oncologists at MD Anderson told her that without it, she’d be dead in a year. (You may now be calling her “crazy.” You wouldn’t be the only one. I stand by calling her a badass. Just wait.)

She went to the Gerson clinic across the border from El Paso, Texas, where my family is from. She stopped eating any animal products, sugar, and processed food.

She drank 11 glasses a day of green juice and carrot juice, and she also ate apricot pits. Why? Inside of apricot pits is a natural cyanide, which is cytotoxic to malignant cells, but not healthy cells. It’s also called Vitamin B17, or laetrile.

At the time, her treatment was illegal in the US, not because it doesn’t work, but because the medical monopoly didn’t want any competition.

Some of the doctors across the border in Mexico were Mexicans, and some were American doctors who graduated in the top of their class but were disgusted by how “standard of care” Western Medicine ignores everything except surgery, tech, radiation, and drugs in trying to help cancer patients.

She didn’t want the chemo and radiation. It was 1981, and at the time, you couldn’t find thousands of stories of people on the internet who have beaten cancer with the Gerson protocols and other non-toxic but effective treatments like you can today. 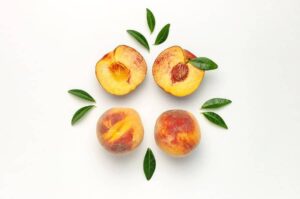 Peach pits contain a natural cyanide, Vitamin B17, which is cytotoxic to malignant cells but not healthy cells.

Almost no one in my family was supportive of her decision. They cried and told her it was too soon for her to die, and, please, please don’t be foolish, you haven’t met most of your grandchildren yet.

[Related: What to Do After You’ve Taken Antibiotics]

But I’ll skip to the punchline of this really cool story. Using natural, cell-selective remedies, my grandmother detoxified herself, killed off all the cancer, and rebuilt her immune system. She was there when all four of my babies were born.

Mums lived more than 20 more years cancer-free and was a great influence on me. The brave decisions she made taught me this:

As Mums got better, she became an avid student of not just the great Dr. Max Gerson (whose nutritional protocols and therapies saved her life), but also Dr. Ann Wigmore, Dr. Bernard Jensen, and Adele Davis. These healers challenged “standard of care” medicine to discover the power of the human organism to triumph over disease, with a little help from powerful foods and substances in our ecosystem that are healing to our cells. 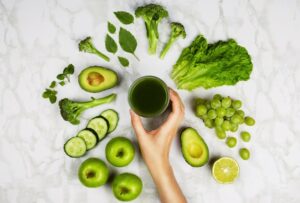 When she became elderly, my grandmother gifted me her ragged old books by these greats in the field of natural medicine and human healing, and they are treasures on my book shelves. I’ve read them so many times that I can practically recite them from memory!

Mums To The Rescue

In 1997, my Mums agreed to meet with my dear friend Brenda, a mother of five young children who’d diagnosed with advanced colon cancer. Brenda’s younger sister had already died of the same disease.

Brenda had just emerged from Utah Valley Hospital, where a board sat around a huge table and voted unanimously that she should have chemo and radiation. Brenda didn’t want it. I said, “I want you to meet my Mums.”

Mums didn’t try to convince Brenda to do anything. She just told her story and answered Brenda’s questions. 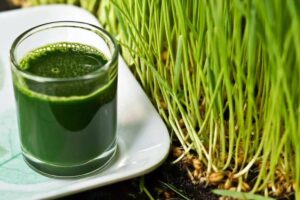 Wheat grass can be made into incredibly healing juice (although it smells just as powerfully!)

Brenda chose not to do chemo and radiation after her surgery. Instead, she followed the Gerson protocols, just as Mums had years earlier.

I went to her garage every other day to juice wheat grass. I made two ounces for her, two ounces for an elderly friend suffering with Alzheimer’s, and two ounces for me. (I promptly threw mine up a few times; the stuff is powerfully healing, but it smells wretched, and I was 2 months pregnant).

I’m pleased to tell you that Brenda raised her children to adulthood and is still enjoying life as a grandmother.

What’s In the Magical Antiviral Hot LemonAid Tonic, and Why

Let’s get to the actual ingredients in Mums’ Magic Elixir and why each one is so important and beneficial to your health! 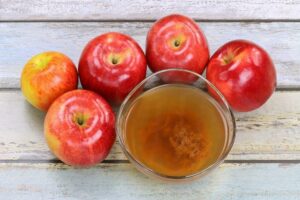 Apple cider vinegar is one of the most studied healing substances in the history of nutrition research. 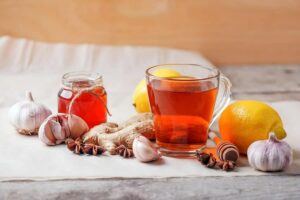 Blend all in a high-power blender. Drink 1/4 cup at the first symptom of illness, and another 1/4 cup every 2 hours, or as desired. You can dilute the drink if the taste is too strong, but do not re-heat the elixir, as this will damage enzymes and nutrients. Drink at room temperature or cold after you refrigerate the remaining portion. It will last a week in the fridge, but you can freeze portions in canning jars for future use.

Watch the recipe video for Mum’s Hot Lemonaid Tonic here. Want a printable recipe? Let me send it to you!

Read next: 10 Amazing Treatments By Europe’s Biological Medicine Doctors (You Can’t Get From Your U.S. Medical Doctor) 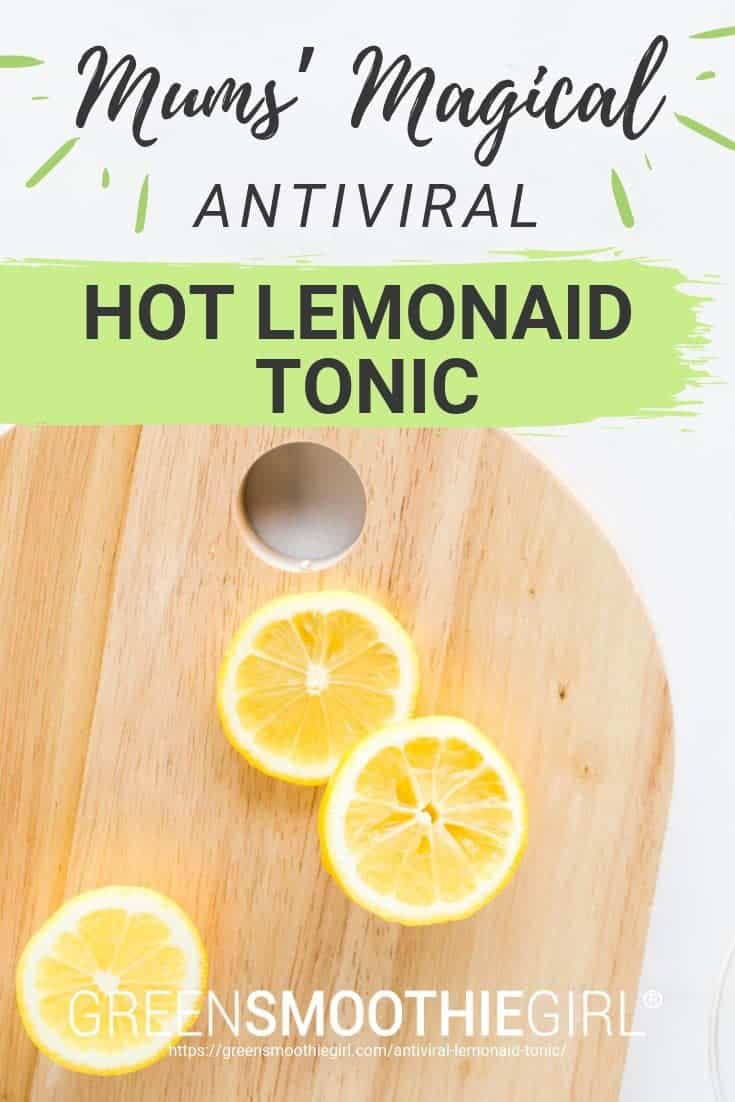