{VIDEO} Ouch, I Sprained My Ankle! My DRUG-FREE Solution 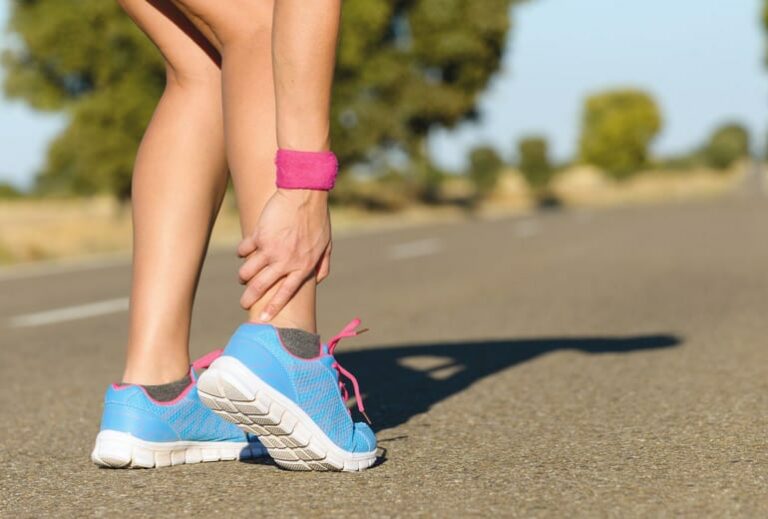 How to Reduce Inflammation Naturally

The evidence is mounting! Ibuprofen increases heart attack risk, among other awful side effects.

When I landed funky at tennis practice, running out of bounds for a shot over my left shoulder, my ankle went so far sideways that, even in tennis shoes, the skin of my ankle scraped the ground. 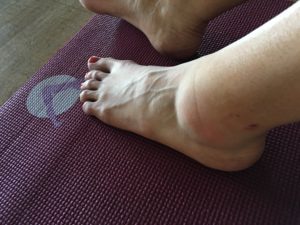 Major inflammation and swelling in my sprained ankle.

It swelled up instantly, and I found myself in tremendous pain. I sat on the ground, trying not to swear, and my team rushed over with ice, a golf cart to get me to the car, and of course, a bottle of ibuprofen.

Ibuprofen, a non-steroidal anti-inflammatory drug (NSAID), is sold under brand names Advil and Motrin as well as Celebrex, Aleve, Naprosyn, and Torodol. It is taken by more Americans than any other drug. In fact, 70 million prescriptions are written every year for NSAIDs. When we include over-the-counter purchases, it is estimated that more than 30 billion doses of these drugs are consumed every year in the U.S.¹

Would you be interested to know how dangerous these drugs are, and what, from the natural world of medicinal plants, works just as well, with no toxic risks and side effects? You’re in luck. And I’ve also got a great deal for GreenSmoothieGirl readers on my favorite product to help reduce inflammation.

First, let’s take a look at what the latest research reveals regarding the side-effects of NSAIDs.

The Dangers of NSAIDs

I certainly understand that it’s tempting to want to get rid of a headache fast. And ibuprofen is pretty effective at that, for many people. But some people use it almost every day, popping the pills as if they’re candy, using it for the chronic inflammation they suffer from.

Because these drugs have become so prevalent in our society, many believe they must be safe for people to take, or certainly the FDA would do something to curb the excessive intake of non-steroidal anti-inflammatory drugs.

Unfortunately, ours is a society that is predominantly run by those with deep pockets, and the big pharmaceutical companies have some of the deepest pockets in the nation. In fact, according to a recent article in ProPublica, these “big pharma companies underwrite three-fourths of the FDA’s budget for scientific reviews.”² Very reassuring.

The truth is that drugs are getting pushed through the system even when show significant side effects that far outweigh the health benefits. In other words, the risks are not worth the rewards.

Here’s what we do know: Back in 2005, some 17 years ago, the FDA warned that taking NSAIDs increased the risk of having a heart attack or stroke. 17 years ago! This was probably due, in part, to Vioxx, an NSAID that caused approximately 140,000 heart attacks in the U.S. alone during a span of five years. In 2004, it was taken off the market.

Then, in 2015, the agency uncharacteristically strengthened the warning against NSAIDs, noting that they elevate blood pressure, thereby increasing the risk for heart attacks and stroke. The FDA warned that this increased risk can occur even with short-term use.³ According to Judy Racoosin, MD and deputy director of a division of FDA, “There is no period of use shown to be without risk.”4

And it is not just heart attacks and stroke that people are at an increased risk for. Every year, more than 100,000 people are hospitalized due to NSAID gastrointestinal complications, and 16,500 people die from these health challenges.5 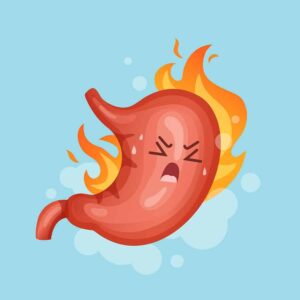 NSAIDs can mess up your stomach acid and cause life threatening conditions.

These GI complications are due to NSAID’s ability to lower the acid in our stomach, ultimately leading to bleeding ulcers. Of course, your doctor simply prescribes another medication for this effect—each with its own set of risks and additional side effects.

These statistics only tell a small part of the story. According to former FDA Commissioner David Kessler, “Only about 1 percent of serious events (adverse drug reactions) are reported.”6

That means the real dangers of NSAIDs could be astronomically higher than the already alarming statistics would suggest.

How To Reduce Inflammation Without Ibuprofen

I don’t even own ibuprofen. I haven’t needed it since I found a supplement years ago that is terrifically powerful as an anti-inflammatory. It’s a superfood combination of the four most powerful natural anti-inflammatory ingredients in the plant world, and it’s actually good for you!

A naturopathic doctor told me about this supplement, which contains curcumin (turmeric), boswellia (frankincense), ginger, and black pepper extract. He told me it was the most miraculous supplement he’d ever prescribed his patients.

He gave me a sample, and I was blown away by the results. When I recently sprained my ankle once again while playing tennis, I used this supplement rather than toxic drugs. It’s called Bosmeric-SR.

Bosmeric-SR is fast acting and long lasting, just like a typical NSAID.

I liked it so well, I contacted the company to see if I could get a special discount for my readers (more on that in a minute).

Why Bosmeric-SR Worked For Me

Bosmeric’s anti-inflammatory power comes from its four ingredients. Let’s take a look at each one in order to understand why this combination of herbs is so potent.

Curcumin is the active ingredient found in turmeric, an Indian spice commonly found in curries. It has been used for centuries in both Ayurvedic and Chinese medicines as an anti-inflammatory agent as well as a treatment for digestive disorders. In recent years, it has become popular in America as a treatment for arthritis. Several studies confirm that is as effective as an NSAID in reducing inflammation.7,8,9 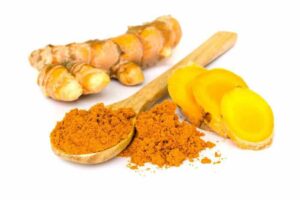 Turmeric is an Indian spice, that contains Curcumin. These ingredients have been discovered as superfoods, capable of fighting and potentially reversing inflammation and disease.

Curcumin C3 Complex is the “gold standard” of curcumin extract.

This potent ingredient is an extract from Boswellia, a tree that grows in the Arabian Peninsula and parts of Africa and India. You’ll be familiar with the resinous dried sap which is otherwise known as frankincense and has been used in religious and cultural ceremonies for centuries.

Boswellia is a potent anti-inflammatory that has been used to treat chronic inflammatory diseases such as inflammatory bowel disease, chronic polyarthritis, ulcerative colitis, and Crohn’s disease. In addition to treating inflammatory conditions, studies show that its medicinal properties include antimicrobial activity. It’s also useful for treating wounds and cancerous diseases.10

It is one of the most valued herbs in Ayurvedic medicine; practitioners use it for illnesses such as cardiovascular disease, bronchitis, asthma, skin and blood diseases, and as a tool to stimulate the liver.11

Boswellin PS is considered the next generation of Boswellia extracts. Boswelllia, in combination with curcumin, was found to be more effective in treating osteoarthritis due to the synergistic effects between the two compounds.12

Bioperine, also known as piperine, is the active ingredient in black pepper, one of the most commonly used spices around the world. In ancient times, physicians used this herb to treat stomach aches. Today, its active ingredient is known for its ability to reduce inflammation, and due to its potent antioxidant properties, it may help prevent the damaging effects of free radicals which have been linked to inflammation, heart disease, cancer, and premature aging.13

It also increases the absorption of the other ingredients in this compound.

This ingredient is the active compound found in ginger, a popular spice used in Asian as well as Indian cuisine. Its medicinal properties have also been put to use for thousands of years. 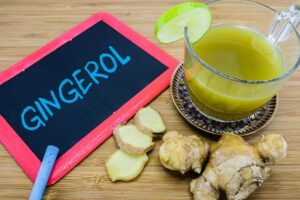 Gingerol has many amazing medicinal properties such as inflammation reduction.

You’re probably familiar with ginger’s ability to help prevent or relieve the effects of nausea and motion sickness, as well as digestive disorders. It has also been used to reduce pain as well as inflammation.

A meta-analysis designed to assess the ability of ginger to treat osteoarthritis revealed a significant reduction in pain as well as disability in those participants that took ginger as compared to the placebo-control groups.14

When these four compounds are combined, they create one of the most comprehensive supplements designed to fight inflammation and pain.

Bosmeric-SR as a Daily Supplement to Reduce Inflammation

I am very picky about supplements because the vast majority are a waste of money—made cheaply, skewing hormone and vitamin/mineral balance, and made mostly of synthetic ingredients the body doesn’t use well.

Bosmeric-SR, on the other hand, is made from patented natural ingredients that are readily utilized and have been shown to work together for better absorption and increased effectiveness.

Inflammation is at the root of all disease, and our cells function optimally when they are not inflamed, so Bosmeric-SR is the most important supplement I’ve ever used. It helps eliminate inflammation and prevents it as well. I take it every day.

You may wonder why I take it daily as opposed to only in those moments when a headache or injury strikes. The reason in this: While you can feel a sprained ankle, and you can feel many inflammatory responses (like arthritis), often there is inflammation in your body that you can’t feel. Many, if not most, of us have serious issues with inflammation, whether we know it or not.

One of the best ways to measure inflammation throughout your body is with a C-reactive protein (CRP) test that measures the level of CRP in your blood. This protein is produced by your liver and sent to your bloodstream in response to inflammation. It is one of the clearest indicators of your disease level and risk. It tends to be high in folks who eat refined sugars, wheat, beer, dairy products, and soda.

You’ll definitely want to get rid of those foods in your diet, as well as alcohol, if you suffer with any inflammatory conditions.

You’ll also see a quick, remarkable decrease in inflammation if, in addition to ridding your diet of the foods listed above, you start drinking green juice or green smoothies, which are alkaline, oxygenating, nutrient-dense, and healing.

Now for the great GSG reader deal I negotiated for you:

BetterWay Health agreed to give us 10% off Bosmeric-SR when you sign up for their coupon, PLUS they’ll also send a free 90-day supply of olive-oil-based Vitamin D3. (This is GREAT because everyone needs D3, and oil-based D is better for absorption). AND they will give you free shipping! 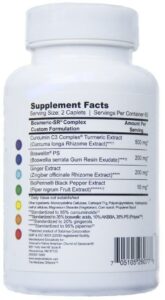 I can’t post the coupon openly, but I do have permission to send it to your email if you ask me. I don’t know how long they’ll let me do this, so you’ll want to grab your secret coupon code now to take advantage of the discount and amazing freebies.

I hope you enjoy my favorite, most efficacious supplement for inflammation and that you’ll try it before taking any dangerous, toxic NSAIDs. This is a powerful daily tool to reduce inflammation or when a headache or injury is causing you discomfort.

Read next: If I don’t want DRUGS as a remedy, I use this: The Encylopedia of Medical Breakthroughs & Forbidden Treatments 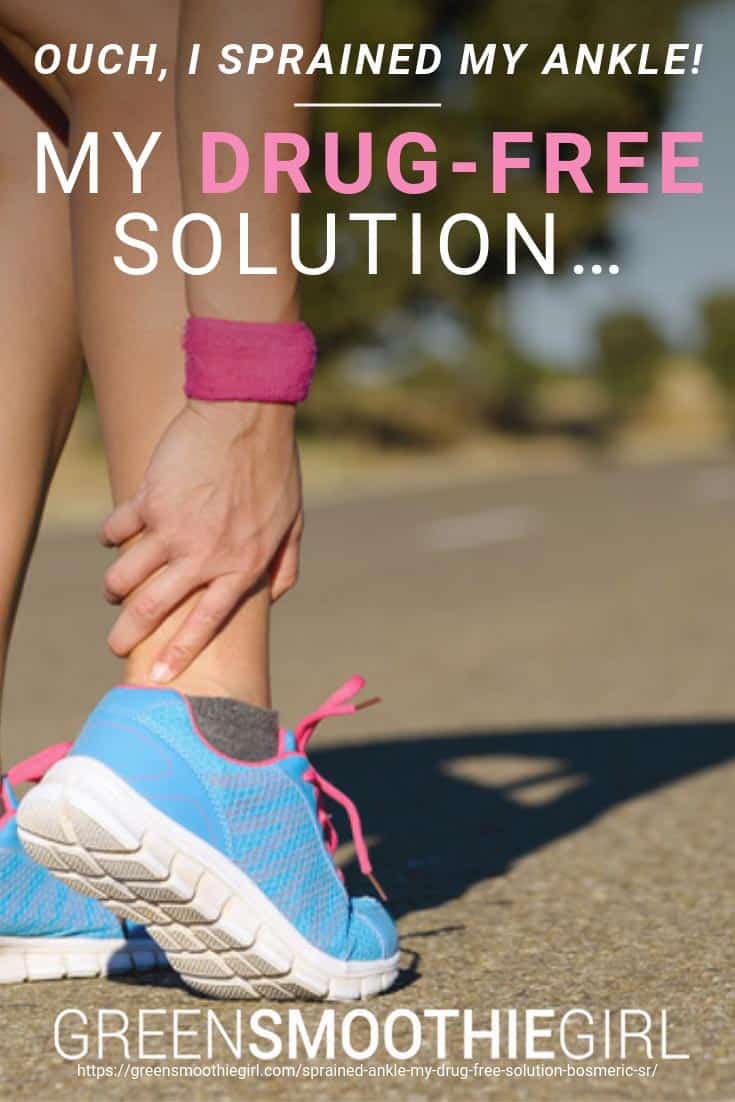 11 thoughts on “{VIDEO} Ouch, I Sprained My Ankle! My DRUG-FREE Solution”