Holy Cow! Oat Milk Is At Starbucks (And Everywhere Else)–Is It Really That Great? 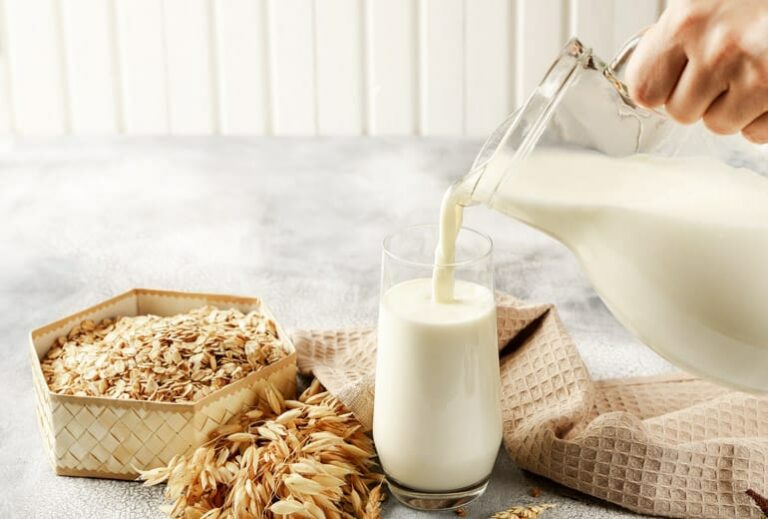 Oat milk is the new kid on the block of dairy milk alternatives, created in Sweden in the 1990s and slowly gaining followers. Obsession didn’t set in until 2018 when some coffee shops started offering oat milk exclusively. Baristas now suggest it while vegans and environmentalists praise it. Why?

Let’s look at what oat milk is, why it is trending, what oat milk’s health benefits are, and how to choose a good oat milk at the store. You’ll even learn how to save money and make your own oat milk at home!

What is Oat Milk?

Oat milk is, at the moment, one of the most popular replacements for cow’s milk. It is made from steel-cut oats or whole groats, blended with water, and strained. 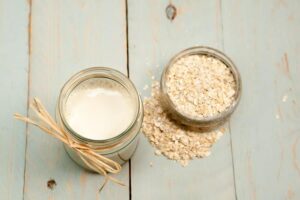 Oat milk is made from steel-cut oats or whole groats, blended with water, and strained.

Some consumers really don’t have a solid reason as to why they switched from dairy to oat milk outside of the fact that it’s trending. If not for dietary concerns, the main reason they go back for more is the taste. Oat milk has a creamy consistency similar to cow’s milk and a naturally sweet flavor. This could be part of the reason why oat milk sales have grown exponentially—a whopping 425 percent from 2017 to 2018.2

Ok, so oat milk tastes good–but is it good for you?

One of the main reasons people turn to oat milk is as a replacement for dairy, either due to dietary restrictions such as lactose intolerance, adopting a vegan diet, or concern regarding the treatment of dairy cows. Oat milk is a plant-based alternative that is free of gluten, dairy, lactose, soy, and nuts.

When buying oat milk, keep in mind that cross-contamination can occur when processors use the same equipment as when producing gluten-containing grains. So if you’re gluten intolerant, make sure the label reads “gluten-free.”

[Related: Wheat Is Good For You–But Not How You’re Eating It]

Oats are not a genetically modified crop. Why? Money, of course—there just isn’t enough demand for oats, and, therefore, large companies such as Monsanto are not willing to put out the massive expenses required to create a GMO crop, like they have with the corn and soybean industries.

So if you see “Non-GMO” on a carton of oat milk, it’s purely for marketing, and not because other oat milks might be made from GMO oats.

[Related: How To Never Eat a GMO Food Again!]

Oats are known for their cholesterol fighting abilities, and oat milk is no different. One study found that men who drank 3 glasses of oat milk for 5 weeks lowered their serum and LDL cholesterol levels.3 This ability is because oat milk is high in beta-glucans, a soluble fiber that binds with cholesterol, reducing its absorption.

[Related: What Happened When I Started Taking Beta Glucan]

High in Protein and Fiber

One cup of oat milk contains about 3 to 4 grams of protein and 2 grams of fiber, beating out all other plant-based milk beverages except for soy, which has more protein but is problematic for other reasons (it’s in far too many products already, is an endocrine disruptor, and nearly always GMO).

Oat milk may be exciting enough to make the Starbucks menu, but it’s got its drawbacks, too.

It is essential that any oat milk you purchase or make is with organic oats ONLY. Recent testing has shown that conventional oats are one of the highest-risk foods for containing glyphosate, one of the active ingredients in weedkillers like Roundup.

While the homemade version of oat milk does offer small doses of calcium, iron, and magnesium, the amounts aren’t impressive. Manufacturers often enrich or fortify oat milk with calcium, potassium, iron, and vitamins A, B2, B12, and D to make the nutrition panel look better for marketing.

Oat milk is also higher in calories when compared to almond milk, coming in at about 130 calories per cup whereas an 8 ounce serving of almond milk is a mere 40 calories. Higher calories isn’t necessarily an issue, but other milk alternatives tend to have more nutrients per calorie.

And, of course, oat milk is not as nutrient-dense as oats themselves; as with all food, it’s much better to eat the unprocessed form.

All things considered, oat milk’s drawbacks are far outweighed by its health benefits. Especially if the alternative is cow’s milk!

It turns out that while oat milk is healthy for humans, it’s also good for the environment. Organic oat milk is better for the planet than other kinds of “milk” for several reasons: 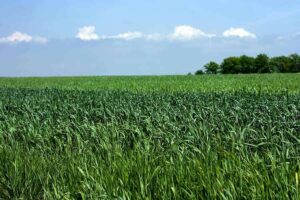 Oat milk is better for the planet than other kinds of “milk”.

The Food Industry Wants A Piece Of The Action

The plant-based beverage industry has grown tremendously—plant-based milk sales were up 9 percent in 2018 while cow milk was down 6 percent.8

As a whole, this market is expected to be worth over $19 billion by 2023 in the U.S. and over $400 billion by 2028 worldwide.9 Unfortunately, these types of numbers attract the big boys—large manufacturing companies that are focused on profits and not so much the health consequences of their processing procedures.

Food processors rely on added chemicals to “improve” on the original, and oat milk is no exception. We’ve already discussed manufacturers “fortifying” oat milk with vitamins and minerals, often in artificial forms our bodies don’t recognize.

Another common addition to oat milk is emulsifiers, which makes food more uniform in consistency and texture, and increases the shelf life. This additive has been linked to low-grade inflammation and changes in the gut microbiota, possibly leading to inflammatory bowel disease and metabolic syndrome.10

Another common additive to oat milk is rapeseed oil, which contains high amounts of erucic acid—a toxic fatty acid that has been linked to cardiovascular damage.11

Any processed food marketed to American buyers also seems to include added sugar, many times hidden under different names, but with the same inflammatory, addictive properties.

And, as mentioned before, oat milk made with non-organic (“conventional”) oats is nearly guaranteed to contain glyphosate. While this chemical isn’t an additive from the manufacturing process, it’s still an unnatural chemical that was literally created to be toxic.

[Related: How To Avoid Hidden Sugar In Your Food]

How To Choose A Good Store-Bought Oat Milk

When purchasing ready-made oat milk, be sure to look for an organic product that is free of industrial additives like emulsifiers, gums, and sugar. One brand that stands out as having a clean product is RISE, which has just four ingredients: Finnish organic oats, French organic sunflower seeds, water, and a bit of sea salt.

[Related: What Does Organic Mean? Should I Pay More For It, Or Not?]

How To Make Homemade Oat Milk

Making your own oat milk is quick and easy and keeps for about 5 days in the refrigerator after preparing.

Step 2: Put the soaked oats into a blender with 3 cups water (you can use less for a creamier texture), and a pinch of sea salt (optional), and blend for about 1 minute.

Step 3: Strain the blended mixture through a thin towel, cheese cloth, or nut milk bag and, voila!, you have oat milk. You may need to strain twice, depending on the desired consistency. 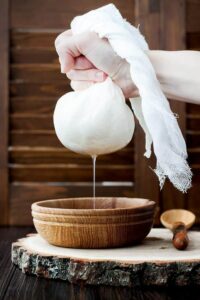 Making your own oat milk is quick and easy.

Some other items you can add to your blender include a pitted date, which adds a touch of sweetness, a dash of pure vanilla extract, or a small handful of fresh berries.

How To Use Oat Milk

Because of its creamy texture and sweet flavor, oat milk is a popular plant-based alternative when it comes to replacing the cream in your coffee or preparing a latte.

It’s also a good addition to smoothies and as a milk replacement in your morning granola or cereal. How about some oat milk in your oatmeal?

Some people use oat milk to replace dairy milk when making mashed potatoes, pancakes, or casseroles.

One word of caution: the texture of oat milk can change when heated up–becoming thicker and a little gelatinous. You don’t really notice it when using it as a dairy alternative in your favorite recipes. Where you will notice it, however, is when you use it in a drink such as hot chocolate. One trick is to add more water, and heat it up before placing in the blender with your oats.

Oat milk is a plant-based vegan milk alternative that is soy-, dairy-, lactose-, glucose- and nut-free.

Its health benefits include reducing cholesterol and supporting a healthy digestive system.

Oat milk is easy to make and delicious!

Next: How I’m Overcoming My Subconscious Programming on Vibe Podcast 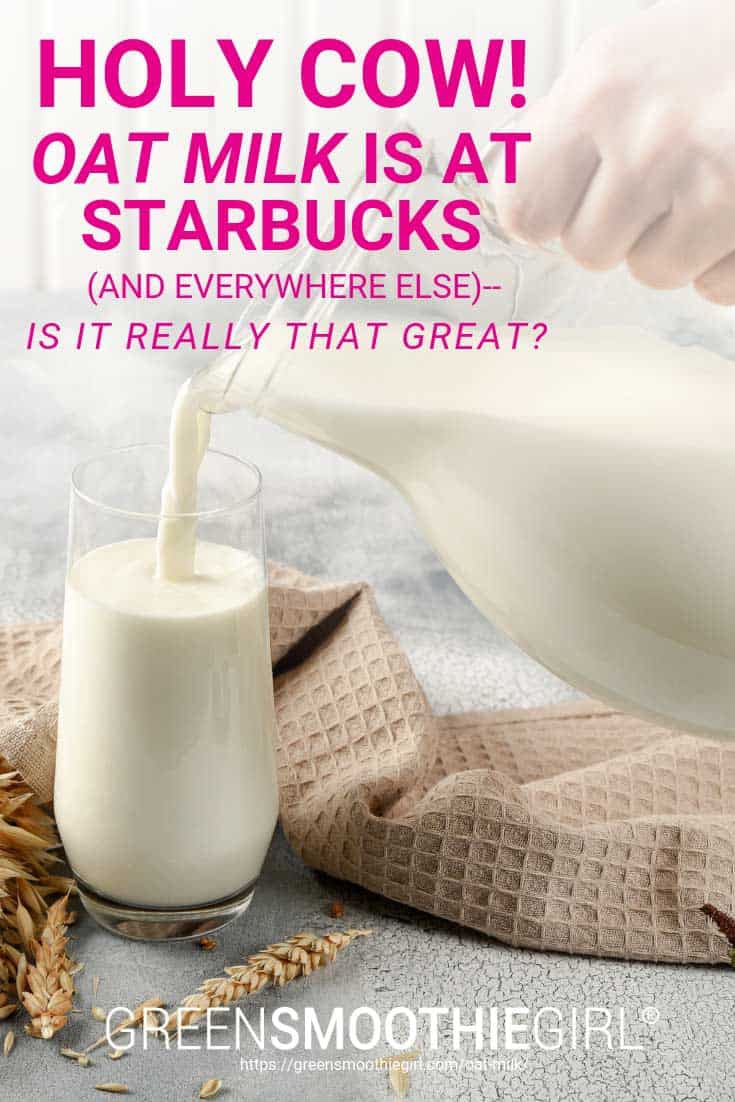 12 thoughts on “Holy Cow! Oat Milk Is At Starbucks (And Everywhere Else)–Is It Really That Great?”