How to NEVER Eat a GMO Food Again!

How To Avoid GMOs

What is a GMO, and why should you take 3 minutes right now to get educated about it?

First of all, I’ve made you an easily printed card to cut out and put in your wallet, so you know what to avoid at the store. More than 95 percent of Americans don’t know what foods are genetically modified and why this issue is so critical to their health! And that’s how many of us are eating GMO ingredients every single week, too--95 percent of Americans!

Does that include you?

Genetically Modified Organisms are living organisms whose genetic material has been altered in a lab by what we refer to as the biotech industry. Unstable forms of a grain, a seed, or a vegetable have been sold to our farmers under the pretenses it will have better crop yield, which has turned out not to be true--but the “good thing and the bad thing” is that GMOs can withstand herbicide spraying, and, the seed itself will kill an insect trying to eat it! 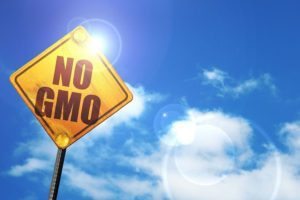 That may be a good thing for a farmer trying to make his work easier and make more money, but it’s terrible for the environment, and even worse for your health. Ten years ago, researchers were seeing warning signs that GMO foods were disrupting normal human immune function, especially harming the gut. Now, more and more evidence is piling up that the effects of fooling with Mother Nature are hurting us all.

Increasing evidence is linking GMO foods to the epidemics of gut issues, autoimmune issues, cancer, and obesity in human beings. The biotech industry, led by Monsanto and Dow Chemical, is pushing for more genetically modified crops and is very politically powerful and very wealthy. Their political action groups have outspent and defeated citizen initiatives all over the U.S., and have successfully gained the favor of Congress.

Now they’re even gaining traction in Europe, although all the countries of Europe, as well as Australia and Japan, have had restrictions or even outright bans on GMOs, for many years.

How does the biotech industry convince our legislators and administrators to roll over and let them take over?

Primarily, they convince lawmakers that they are solving the world’s hunger problems, even though they pay for the research they quote, and independent research is showing that their claims of higher yields are false.

So far, we are not making gains at stopping GMO foods from getting in our food supply. In fact, the biotech industry was successful at getting a law passed recently that allows manufacturers to NOT tell us their product is GMO. They have to tell us SOMEWHERE…but they can make you go to their website and dig, to find out. (Who is going to do that?)

I want you to have this wallet card so you have an easy reference, at any store, for what ingredients to avoid. You may not have linked your gut issues to eating invisibly genetically modified foods--but it’s an important consideration! 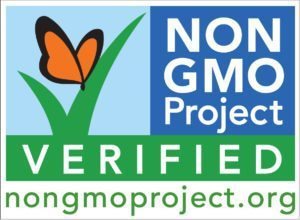 Look for foods marked with this NON GMO Project Seal, to ensure you are buying food that has not been genetically modified. Click the logo to access the database of over 36,000 Verified products!

I love the Non-GMO Project, voluntary for a manufacturer, so that savvy buyers like YOU know what to buy. The more you and I become aware of what foods are genetically modified, and we look for this symbol, and buy these products and not GMO products, the more we are standing up for the environment, and the health of our children, and standing up against big biotech companies whose only motive is profits.

By the way, don’t assume that because something in Non-GMO, that it is also good for you! Just like with gluten free…..there’s non-GMO junk food, and there’s gluten-free junk food too! If it has lots of ingredients, if it has preservatives and ingredients you can’t pronounce, and if it’s in a package, it’s likely not particularly good for you, and it’s definitely not as good for you as a good, old-fashioned salad full of greens, vegetables, sprouts, and some kidney beans would be!

I make sure I spent 80 percent of my grocery budget in the produce section.

Some of your produce is GMO, at this point, and your beef cattle have been feed GMO alfalfa--so it’s important that you print this wallet card, just stick it in your purse for when you’re grocery shopping. Pretty soon, you’ll have it all memorized, and you can teach others about how to stay away from the GMOs!

I believe this war will be won first at the consumer level, with our buying habits. Not at the legislative or bureaucratic level. Big industries (dairy, meat, processed food, pharma, and biotech) with interests counter to your health interests, have far too much influence with the people running the government.

I’m not saying we should give up, there, and I’ve given a lot of my own money to the anti-GMO fight, for one thing because I want farmers to be able to grow seeds that reproduce! 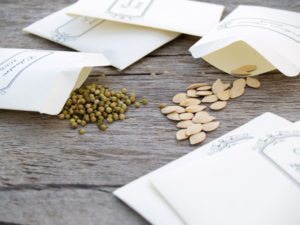 Please store and use heirloom seeds, which is doing your part to preserve non-GMO seeds!

Monsanto has been stomping out any farmer who stands up to them, because they want to own the world’s seed supply, so that seeds don’t reproduce (like they’re supposed to, and have for thousands of years), and everyone has to buy their seeds from Monsanto. (Please store and use heirloom seeds, which is doing your part to preserve non-GMO seeds.)

(Sometimes when I write this blog, I feel like I’m trapped in a sci-fi movie. Who knew, getting that English degree 30 years ago, I’d use it to write pleas to thousands of people to stop buying seeds from an evil billion-dollar empire who wants to control all the crops of the world? The world we live in can be surreal, so we need to be involved and aware, and vote with your dollars!)

Sixty countries have banned or limited GMO imports, but the U.S. Government has bought into the claims of the “research” presented to them, and guess what, Monsanto paid for (and cherry-picked) the research.

So, it’s up to you and me to educate ourselves, and stop buying animal foods fed GMO plants, and stop buying gene-spliced vegetables and grains, and packaged foods containing corn, soy, beet sugar, and other Frankenfoods.

Let me answer another related question many people have, navigating labels: IS GMO ALSO ORGANIC?

Answer: If it’s organic, it’s also non-GMO. An organic farmer can’t plant GMO seeds, and an organic packaged product can’t have any GMO ingredient. However, a product can be Non-GMO but non-organic or conventional (sprayed produce).

By the way, feel free to print this wallet card for friends who are trying to make healthier buying decisions. It’s free, and I want to spread the word, so thanks for supporting GreenSmoothieGirl, and grab your freebie for your next trip to the grocery store or natural products store.

Join me in never buying GMOs. Save your health, save the planet.

13 thoughts on “How to NEVER Eat a GMO Food Again!”