You’ll LOVE Our Smoothie Success Pack | Add These 2 Ingredients for Smoothies That Satisfy >> Click for 25% OFF, This Month Only

28 Signs That You Are Electrosensitive 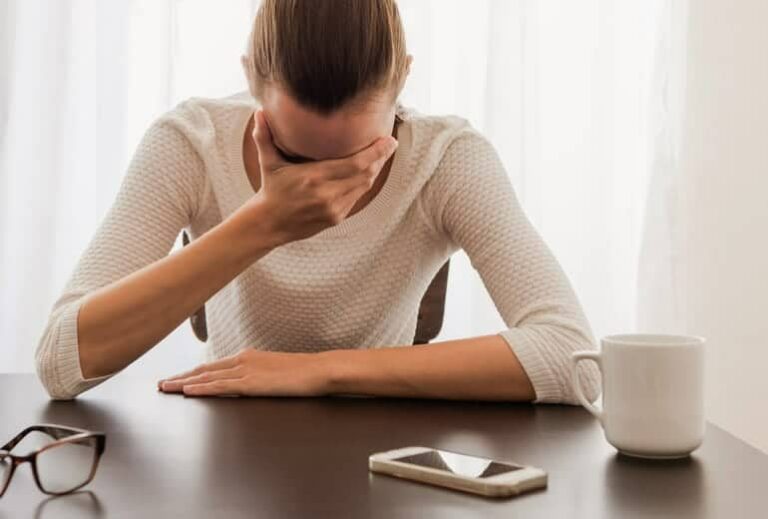 If you can’t figure out what’s been bothering you, there may be one cause you haven’t considered that’s hiding in plain sight. The culprit may be electrosensitivity.

Also known as electromagnetic hypersensitivity (EMHS) or microwave sickness, those experiencing this condition attribute their ailments to electromagnetic frequency (EMF, or electromagnetic field) exposure, which can affect sensitive people physically, emotionally, and neurologically.

This phenomenon dates back to at least World War II with radar development, in which Soviet citizens near radar sources reported a notable increase in headaches, fatigue, appetite loss, difficulty concentrating, and poor memory—ailments that we hear much more about today as EMF has increased a thousand-fold in our Internet-Everywhere environment.

Western countries dismissed the reports at the time, even as their own radar operators experienced similar symptoms.1

Because EMHS is not currently recognized as a medical diagnosis (although the designation has been recommended by coalitions of medical professionals)2, individuals must be proactive about their health in treating symptoms, as well as their root cause, while we wait for the rest of the world to get educated and respond.

What Are the Signs of Electrosensitivity?

People experience electrosensitivity in different ways, and there’s a wide range of adverse effects reported that span physical, emotional, and cognitive categories. These include3:

Because symptoms are so wide-ranging, most doctors do not attribute these signs to EMHS. However, various reports have recommended both brain MRIs4 and blood panels5 as adequate diagnostic tools, and an additional study in Reviews on Environmental Health noted that EMHS has physiological commonalities with inflammatory conditions, suggesting that simple and commercially available tests can help diagnose the sensitivity.6

Still, conventional doctors tend to focus only on treating symptoms to alleviate any discomfort, and most people do experience symptoms mildly, but the root of the problem is still cause for concern.

Even though the World Health Organization’s International Agency for Research on Cancer classifies EMFs as “possibly carcinogenic” (due to their association with glioma, a type of brain cancer),7 the WHO maintains its stance that these reported sensitivities to environmental factors are grouped under a general, rather unhelpful umbrella term: Idiopathic Environmental Intolerance (IEI).

An Increasingly Common Source of Electrosensitivity in the Home: Smart Meters

Occasionally, people with no known previous electrosensitivity will all of a sudden begin to suffer from a number of symptoms, in specific places like home or work. 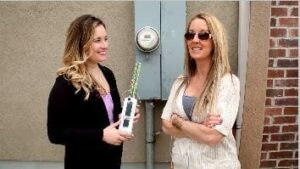 Robyn and “Dr. EMF,” Libby Darnell, measuring the EMF of the meter outside Robyn’s home.

When a normally comfortable environment becomes noticeably different, it’s often an outside source of electromagnetic fields. In many cases, it’s when a building’s analog meter for measuring electric usage is replaced with a smart meter.

Power companies can make the change in their metering without a tenant or homeowner’s knowledge because the meters belong to the power companies, rather than to the dwelling itself.

Switching to a smart meter is a cost-effective choice for them, since smart meters use wireless technology to communicate consumption data to the energy company, without having to send an employee to manually check usage.

For homeowners who are savvy and proactive, however, several states allow people to opt out of the change for a monthly fee.

But when opting out isn’t a choice, there are shielding technologies that can protect occupants from the worst of the smart meter emissions. Check out my podcasts with “Dr. EMF” Libby Darnell and Nicolas Pineault.

If you do just one thing, get my FREE EMF Action Plan to learn about your shielding choices. Many of the things you can do to reduce your radioactive exposure are free or very inexpensive. You can put a sign that says “Do Not Install Smart Meter” on your analog meter, for one!

Across the pond, European countries have dismantled sources of electromagnetic frequencies to protect its citizens, especially pregnant women and children. France, Germany, and a number of other countries in the EU removed wireless networks from libraries and schools, while several other countries have prohibited use of mobile phones by children (age limits vary by location)9.

Russia leads the world in acknowledging the problem, and funding and publishing many papers about the impact on human health of increasing levels of radiation.

In contrast, back home in the US, 5G mobile networks are being implemented all over the country, requiring a denser population of cellular antennas to surround citizens, especially in urban areas, essentially mandating exposure. 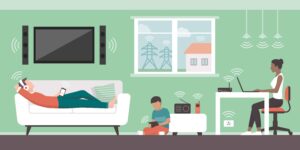 In the US, 5G mobile networks are being implemented all over the country, requiring a denser population of cellular antennas to surround citizens, especially in urban areas, essentially mandating EMF exposure.

More than 180 international scientists and doctors from the Centre for Research on Globalization have advised against this rollout, but major telecommunications companies like Verizon and AT&T continue to move forward with implementation while it’s still legal.10

The Rise of “EMF Refugees”

How can we escape so much exposure to low-grade radiation? Electrosensitive people are colloquially known as “EMF refugees” in Europe, and the most sensitive must find places to visit or live free of EMF.

As you can imagine, EMF Refuge Zones are not easy to find, but they do exist. In the United States, for instance, Green Bank, West Virginia, is a designated National Radio Quiet Zone, created by the Federal Communications Commission (FCC) in 1958 to block radio astronomy telescopes. The 13,000-square-mile span prohibits wireless technology as it disrupts the telescopes, and other transmissions from radio, mobile phones, and other devices have limited frequency.

Even when would-be EMF refugees can’t do something as drastic as uprooting their lives and moving to a less-exposed area, online communities on Facebook and other social media platforms help them connect with others who experience the same sensitivities.

Because EMHS isn’t often taken seriously by those who don’t experience it, these online communities offer a place of moral support they may not find otherwise.

What to Do if You Are Electrosensitive

Not everyone has the ability to take refuge in an EMF-free zone, but those who believe that their symptoms are the result of electrosensitivity can take steps to reduce their exposure by eliminating sources of EMF radiation, or at least replacing devices with alternatives that emit lower frequencies.

There are products available to help filter and shield from EMFs in the home, even including clothing and baby blankets.

For a comprehensive list of ways you can reduce exposure, I spent many hours building you the EMF Action Plan. It is an excellent, free resource that outlines all the possible ways this can be done, even including tips for reducing exposure while traveling by air, which is highly problematic. Download the plan here. 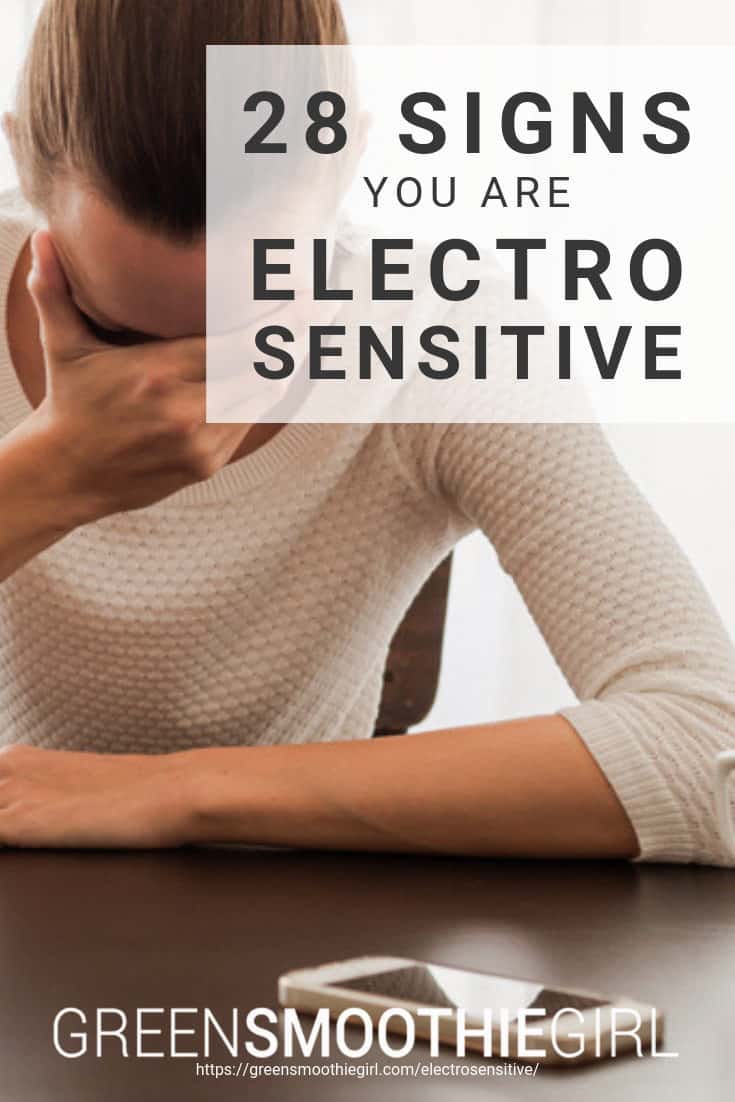 Disclaimer: This article may contain affiliate links, which allow you to support our mission without costing you extra. This post was originally published in September of 2018 and has been updated for accuracy, organization, and relevance.

One thought on “28 Signs That You Are Electrosensitive”