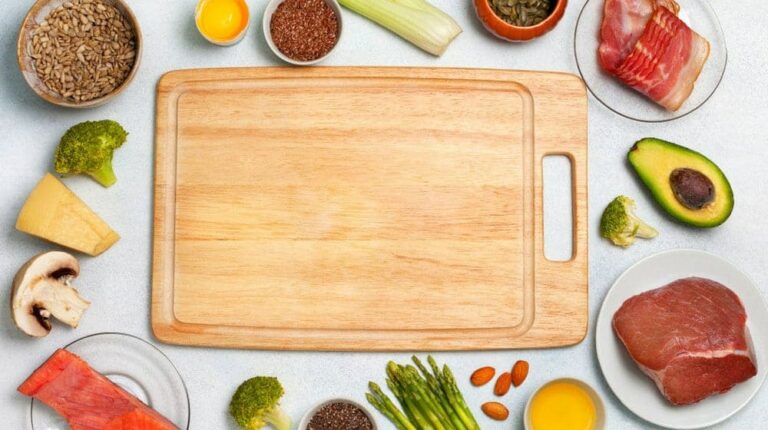 Bob Harper is The Biggest Loser’s enthusiastic personal trainer. He rose to fame, helping hundreds of contestants lose thousands of pounds, with his positivity and encouragement, on one of the most successful reality TV shows that had us all glued to our seats. Both he and Jillian Michaels have built multi-million-dollar personality brands, drafting off their success of the hit reality series.

On February 12, 2017, the super-fit Harper had a massive “widow-maker” heart attack. The kind that only 6 to 10 percent survive from. They used paddles on him, at the gym where he collapsed, and witnesses say his body levitated several inches off the ground.

What did He do Then?

He consulted with doctors everywhere and followed the counsel of the great Caldwell Esselstyn, MD. He’s the vegan cardiologist who brought Bill Clinton back from quadruple-bypass surgery and later, coronary stent surgery. 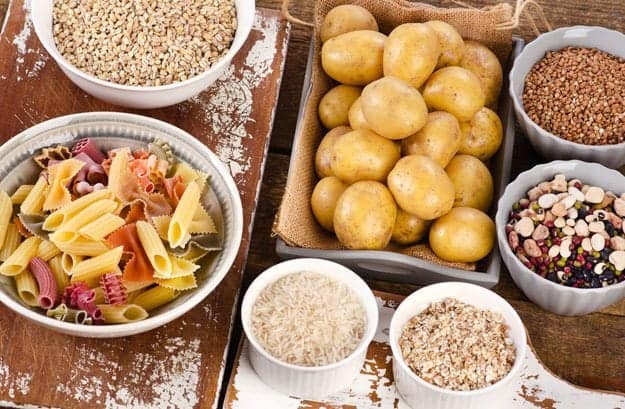 Clinton, now in his 70s, recovered by adopting a high-carbohydrate, plant-based diet.

Did I just say “high-carbohydrate”? Yep. That’s what Bob Harper is eating now, too.

He’s repenting of his previous phobia of the dreaded “carbs” he avoided for decades.

Now that he has learned that carbohydrates are fuel, he’s spreading the word. That avoiding them puts your body into a stressed, unnatural state that, as he says of his previous animal-products-intensive diets:

“They didn’t work for me. They left my body off balance.”

The introduction to his book, The Supercarb Diet, explains how he’d spent years, after buying into the most recent diet fads, fearing and avoiding carbohydrates of all kinds, and advocating low-carb diets.

He explains that he’s “learned to embrace foods and philosophies I didn’t always subscribe to in my previous years.”

Going Back to the Caveman Diet

Now he wants to help the rest of us find our way back to a more sane way of eating — the kind of eating we did for 3.4 million years of human history before we had heart attacks and before we had the high-protein and high-fat diets.

“The dieting world,” he says, “went back in time to find variations of the caveman diet, but I found those high-protein plans had too much fat and weren’t so great for my heart.”

The Ketogenic and Atkins Diet

In a recent “manifesto” blog post I wrote, I blasted these two diet fads as nothing like what cavemen ate, nothing like what Tibetan sherpas eat. In fact, they were completely contradictory to what thousands of studies and the world’s healthiest people show to be a disease-preventative diet.

I predicted the “manifesto” would get me hate mail. And it did, in numbers I’ve not seen in 11 years as a blogger and nutrition author.

But the positive feedback was 10-to-1 higher from people uncomfortable with the animal-products-excessive latest diet fads. They thanked me for speaking up about the elephant in the room, in the diet and nutrition world.

That is, the kooky idea that eating even more animal foods, in a country already proven to eat extreme, unprecedented amounts of animal fat and animal protein is a legitimate path to health.

Devoting to a Diet

I compared the Keto and Paleo crazes to religious fervor, because those who buy in, buy in hard. I observed how emotional people become, over the “diet” they subscribe to.

And Bob Harper confirms that it was mentally and emotionally anguishing for him to challenge his adherence to the high-protein obsession of most fitness professionals.

It took a heart attack to get him to look at his disease risk, rather than just his leanness.

Often people who feel better temporarily following these diets attribute it to the dogmas of the diet, when perhaps these diets banning processed food were a step up from the dieter’s previous Standard American Diet—of packaged, processed, and drive-thru food.

And Harper, faced with an early death that no rock-hard abs could save him from, has discovered that carbohydrates are not, in fact, the villain, but rather, our primary fuel source.

Why is Ketosis Bad for You?

Of the Ketogenic diet, he says this after explaining that “ketosis” takes the body out of balance because carbs are critically needed for both energy, and to break down fat:

“Without the right number of carbs, a by-product will enter the body. This by-product is known as ketones.

When your body creates ketones, you run the risk of ketosis. I like to think of ketosis as the body’s way of telling you something ain’t right.

“Now, you may have heard of a diet that is quite literally called the Ketogenic Diet. It’s for people who want their body to enter ketosis….however, it comes at the price of the loss of good complex carbohydrates and a whole lot of other negatives.

“Urine sticks are even involved. Unless I’m pregnant, I don’t want to be peeing on a stick.

Ever talk to someone on the ketogenic diet? You can tell right away because their breath is often bad.

One type of ketone that is produced is called acetone. Acetone comes out in the breath (and urine), and it smells rotten. I’m talking dragon-breath bad.”

“I want us to use what the body was MEANT to use for fuel, and that includes carbohydrates and the right mix of nutrients.”

Taking Out the Carbage

He goes on to explain that fiber is a carb, and in fact, it’s a carb that slows down digestion and helps us feel fuller, longer, helping us steer clear of lousy foods, or what he calls “carbage” (the bad carbs) and other poor choices.

Studies About the Benefits of Carbs

His begging the audience to consider how carbs actually create satiety reminds me of one of the 800 statistically significant findings of the epic Oxford-Cornell China Study, led by Cornell’s T. Colin Campbell, Ph.D.

That is, the researchers discovered among the study’s participants who ate very little animal protein, that they could eat 200 calories more, than their meat-eater counterparts, and stay lean!

Of his own journey to conquer his carbophobia, Harper says this:

“We are all brainwashed into thinking that we will get fat if we have carbs.” And, he insists, nothing could be further from the truth.

In fact, after explaining how bringing whole-food carbs back into his diet was key to his recovery, Harper’s first chapter is titled, “Carbs Don’t Make You Fat.”

Actually, we all aren’t brainwashed. Only those who look to the diet industry and most (not all) personal trainers for their nutrition advice have been led astray. Too many weight-loss professionals have focused on attempting to “hack” the body’s metabolism at the expense of the dieter’s disease risk.

Those who look at the evidence cannot miss the thousands of studies in hundreds of medical journals, documenting the importance of carbohydrates as our primary fuel source, and not at all linked to weight gain, but rather (in the case of whole-food carbohydrates) linked to lowering the number of calories absorbed by digestion, and even speeding up your metabolism.

Do you have to be a vegan to eat a disease-preventative diet? No. Some of the blue zones eat small amounts of animal proteins, as do many healthy people worldwide.

NOT a Low Carb Plant-Based Diet 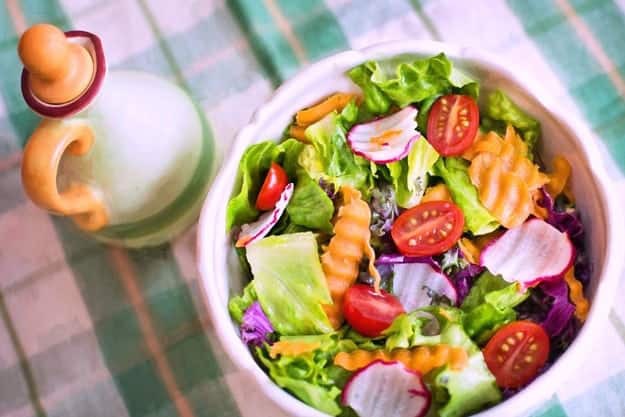 But in reaction to my Keto and Paleo Manifesto blog post, some people responded that these diets are “plant-centric,” or “plant-based,” and nothing could be further from the truth.

Carbohydrates are highly restricted, entire classes of plant foods known to be nutritious are banned, and every study of Paleo and Keto diets show them to be higher in animal proteins and fats than even the Standard American Diet.

You Need More than just Veggies

Just because there are a few veggies in dieters’ meal plans doesn’t make the diet anywhere near high enough in nutritious, whole-foods carbohydrates (plant foods), or anywhere near low enough in the saturated animal fats and proteins that may have contributed to a super-fit personal trainer’s massive heart attack.

A few of the biggest nutrition studies providing evidence that carbohydrates (plant foods) should be our staples, for a long and healthy life, include these three:

This project was led by T. Colin Campbell, Ph.D., of Cornell’s Nutrition department. It studied 6,500 people in 65 different counties in China, finding that not only do those who eat only 5% animal protein live without cancer, heart disease, and autoimmune disease, but they stay lean, eating more calories than those who consume 20% animal protein.

This is a study by Dan Buettner and National Geographic that explore the 5 longest-living populations on Earth and discover—surprise!—that all of them eat 90 to 100 percent plants (carbohydrates).

The study reviewed over 10,000 studies published in the past decade, and its #1 finding is that “eating plants prevent disease.”

The domination of the low-fat diet era (the 1980’s) still has people afraid of fats and needing de-programming, even though that diet fad has come and gone, having been completely debunked by evidence.

(Fats are good for you. But fats found in nuts and seeds are some of the best, and overeating animal fats are unwise.)

Shifting Back to Whole Foods

Now, we’ve got some work to do, to deprogram North Americans of their phobia of high-fiber, high-nutrition foods like fruits, whole grains, and legumes.

Books for a Plant-Based Diet

These are a few of the best books you can read, to re-embrace eating plants (which are all the carbohydrate foods) like Bob Harper has, as key to your disease resistance.

Each of these three books cites hundreds of published studies showing plant foods (carbohydrates) as the crux of your diet, to be key in preventing disease, including cardiovascular disease that almost killed Bob Harper:

Are you ready to challenge your fear of carbs? (You need to, if you’ve been convinced that you should avoid carbs. I hope you’re starting to re-think the dieter mindset.)

Here are three great reads exposing the “fraud,” “myth,” or “phobia” surrounding the anti-carb movement, each with extensive citations:

Carbohydrates are the fuel of the human organism, and the most appropriate fuel, with some good fats and good proteins as much lesser parts of the diet.

In doing his part to de-program people from the diet industry’s brainwashing, Harper says,

Kudos to weight-loss guru Harper, for the humility to share his journey since his life-threatening heart attack, to reverse his original flawed position, and educate his fans that carbohydrates are the friend, not foe.

“My focus has become,” he says, “not just weight loss, but doing it without sacrificing the rest of your health.”

What do you think of Bob Harper’s new perspective on carbs? Share your thoughts with us in the comments section below!

Up Next: Why Ketosis Diets Will Fail: The Paleo and Keto Manifesto

Disclosure: This post may contain Affiliate links that help support the GSG mission without costing you extra. I recommend only companies and products that I use myself.

Editor’s Note – This post was originally published on April 4, 2018, and has been updated for quality and relevancy.