How to Do Ear Candling 101 | Green Smoothie Girl 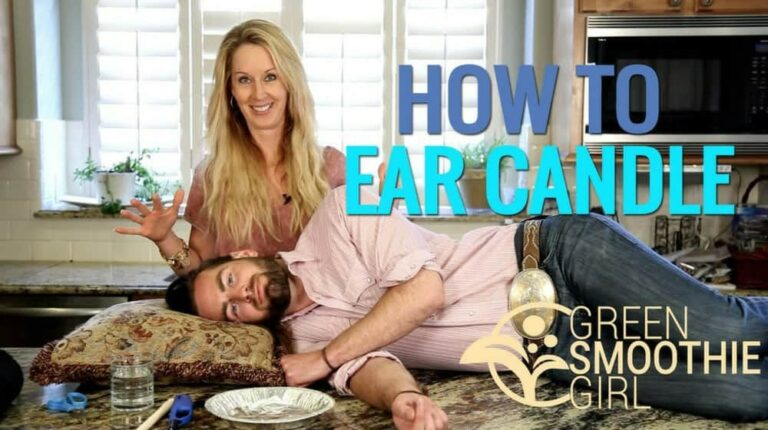 Learning how to do ear candling will teach you a very old, tried-and-true way to get fluids from the ear moving. This will remove pressure on the eardrum to clean out the ear canal from excessive wax. It can also clear a middle ear infection. If you want to learn more about this and the other health benefits of ear candling, read on.

How to Do Ear Candling 101: Here’s What You Need to Know

What you need to know about the ear candling supplies is they are inexpensive and can be found on online stores and local health food stores. Since the Food and Drug Administration (FDA), whose members all have conflicts of interest with drug companies (major stockholders, former employees, and more) have banned claims that ear candling can help earaches, sinus headaches, and allergies, let me say this: I don’t make and sell ear candles. I don’t have a book on how to do ear candling to sell you.

However, I’ve had LOTS of really amazing experiences helping friends adopt this practice, and it’s another way to avoid antibiotics and their terrible side effects. I’m a very experienced “ear candler,” and I want to share with you my thoughts on the practice of how to do ear candling and how to do it safely and effectively.

So if you’d like to try it, watch the tutorial video and grab my instruction sheet. There is fire involved, so when you click to get the instruction sheet, we’ll also send you my short tutorial video to watch (my subject is my gorgeous former boyfriend and long-time friend, Lyle), to make sure you’ll learn the safe way on how to do ear candling.

Medical doctors paid to write articles against holistic practices say online that there is no ear wax coming out of the ear in using this practice — that is the wax from the ear candles themselves, colored orange by the candling materials that make it appear like ear wax. This is easily proven false – what’s at the bottom of the candle, when you’re done, is clearly orange ear wax. The candles are white coated with food-grade paraffin or beeswax.

You can find quality ear candles on Amazon.

The “anti-quack” folks are literally assigned to debunk everything outside of drugs, surgeries, or medical technologies (the centerpiece of Western Medicine’s mega-billion dollar monopoly) on sites such as Quackwatch.com and WebMD. Snopes isn’t the final authority either. You can see on these sites how thin their research is, quite often, and how Quackwatch, for instance, takes on virtually everything in holistic healing, from the entire profession of homeopathy to every natural treatment or practice out there. We’ll set aside the general agenda of a number of these large “muckraking” sites on the internet, to deal specifically with ear candling.

As with many things, you may wish to try it for yourself to decide if it’s legitimate or not. If you decide that you do, I’ve prepared a set of instructions for you, which I’ll send to your email right now. Those “debunking” ear candles claim that there is no vacuum created by the tube and the flame. This is also easily proven false.

When you perform the procedure, as I have done on many others (I have also been the receiver of the treatment probably 100 times combined), you can feel the wax deep in your ear melting and moving. It often tickles and you hear, against your eardrum, the movement of fluids.

In WebMD articles, or Quackwatch, or SkepticalInsider, they make fun of the “ignorance” of ear candles as a practice to remove ear wax or get trapped fluids moving. But until I discovered ear candles, because I have small ear/nose/throat passageways, I repeatedly had wax-buildup-related hearing problems.

In college and beyond, do you know what doctors did for my problem?

They put stool softener in my ear and then, they Water-Pik’ed my ear, sometimes for up to 20 minutes at a time. It was dreadfully painful. I’ll take the “risks” of ear candling (easily mitigated with the safety tips in my video and instruction sheet) any day over that tortuous procedure that probably had a serious risk of rupturing my eardrum!

You read that right. They, the MD’s, nurses, and physician’s assistants, attacked my eardrum with a high-pressure water hose sold for cleaning teeth! This didn’t just happen at one clinic, but multiple clinics — the student health center when I was a student, and then a private clinic years later.

The last time I had it done, I didn’t have an ear infection when I went in, just hearing loss. But I had vertigo and lots of pain for two weeks after the treatment. In one episode, they never got anything out of my ear, and my hearing was not restored.

The WebMD article also cites evidence of people having melted wax from the ear candles burns their eardrum. In my many times using ear candles, this has never happened.

And, it isn’t as if Medicine itself has a really sophisticated way to eliminate excessive ear wax when it affects hearing. Perhaps they should do legitimate research and evaluate whether the candle does, or create heat and a vacuum that brings wax out of the ear.

I’m giving Lyle an ear candling session here. No pain, no mess! Every time I do it, my hearing comes back. It gets stuff moving that my hearing keeps improving, hours or days later. (I always seem to need it after scuba diving, swimming, etc.) My ear often tickles for several days or even a couple of weeks, because of fluids moving.

When I told my own pediatrician, many years ago, that I wouldn’t be filling the antibiotic prescription for my young daughter until I’d tried ear candling? She said, “Great, that works, and let me tell you why.” (She then explained exactly what I’m telling you here. Years later, when I brought my teenage son to her to freeze off his warts, I told her that I wanted to use essential oils but he refused — and she said to Tennyson, “They work, and let me tell you why.” And then told me she uses them with her own six little kids, after explaining to Tennyson why oils are worth a try, and not painful like what she was doing to him with the nitrogen.)

Some MD’s, these days, even though their med-school training includes exactly nothing holistic, do their own research, and try to avoid drugs and surgical interventions with their own families. I am blessed to have found a pediatrician who is a mama of six young children and a fan of other modalities as well.

Ear Candling 101: What You Need to Know

So, like I said earlier, research and try it for yourself to decide if ear candling is for you. I’ve made a very easy list of instructions, supplies you’ll need, and tips that I’ve learned and used for years and years on how to do ear candling.

Just click to tell me you want it, and I’ll send it straight to your email along with my tutorial video. You can print the instruction sheet, keep it for reference, and feel free to use your knowledge to help others outside your own family who may want to know a method, tested by many generations and many cultures, to safely and effectively clean out the ear and get the gook moving to resolve problems before they get serious.

Did we miss anything on our discussion on how to do ear candling? Tell us in the comments section below!

Up Next: Learn OIL PULLING to detox yourself every morning!

Editor’s Note: This article was originally published on August 2, 2016, and has been updated for accuracy and relevancy.