Why Root Canals Fail, and What to Do About It 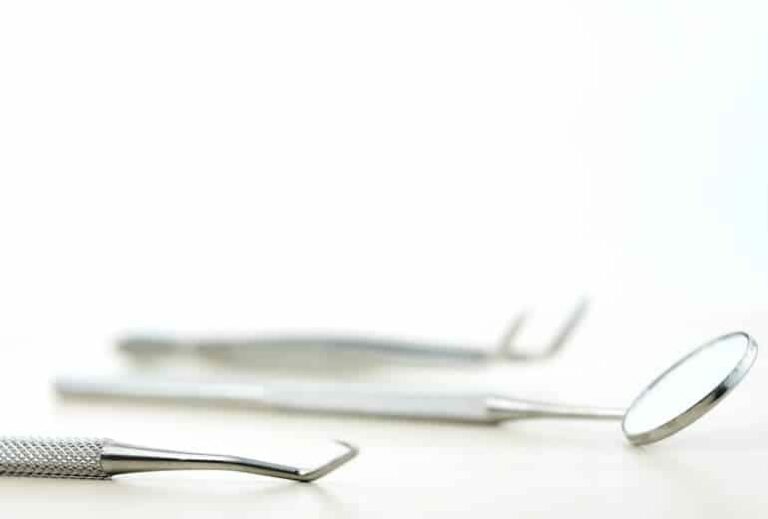 This article was reviewed and approved by Dr. Michelle Jorgensen, DDS, FAGD, TNC, and dental advisor for GreenSmoothieGirl.com. The information included here is not a replacement for professional diagnosis or treatment; please consult a holistic dental professional.

If you’ve undergone a root canal, you probably did so with both trepidation and gratitude, fear regarding the procedure, and relief when the pain subsided! Let’s take a look at just what happens when you sit in the dentist’s chair to learn why root canals often fail — and how holistic dentists can help clean up the toxic aftermath. 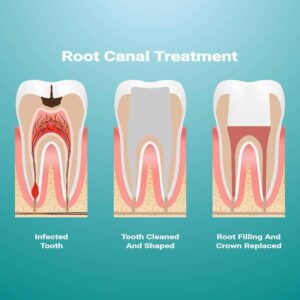 Illustration of what occurs during a Root Canal procedure.

To perform a root canal, the dentist drills a hole in your tooth in order to expose the pulp cavity, the central chamber in your tooth that contains the nerve, blood, and lymphatic tissue that supplies your tooth with life-giving oxygen and nutrients. Tiny files are then used to remove the contents of this cavity.

Once all tissue is removed, the canal is flushed with chemicals (bleach, essentially) designed to kill any remaining bacteria. Your tooth is then filled with a material (usually a rubber-like substance called gutta percha) and sealed to minimize the chance of re-infection. Because your tooth is now essentially dead, making it brittle and prone to a fracture, a crown is placed over the tooth.

The good news: Without the nerve, you will no longer feel pain.

The bad news: It’s impossible to completely sterilize a root canal-treated tooth. The bacteria that remain then begin to set up colonies, and the tooth becomes infected, resulting in a failed root canal.

In order to understand why most root canals fail, we need to share a brief review of the anatomy of your tooth.

Each of your teeth has anywhere from one to four roots in separate canals, and each of those canals may have accessory canals, some of which branch off horizontally. These canals are not always straight; in fact, many of them are curved. You can see from this image the many curves a root canal can take. 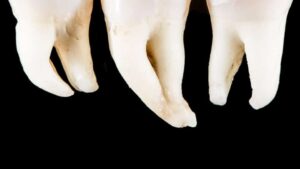 Root canals are not always straight; many of them are curved.

Dentin (the seemingly hard material between the enamel and the canal) is made up of millions of tiny tubules. If you took the tubules from just one tooth and placed them end-to-end, they would span approximately three miles. These tubules exist to transport nutrients from the center of your tooth to the enamel.

This anatomy makes it all but impossible to truly “sterilize” a tooth, though many traditional dentists suggest otherwise.

While traditional dentists and endodontists (dentists that specialize in root canal procedures) generally report a success rate greater than 90 percent, a report in General Dentistry disagrees. “This study of PBRN (practice-based research networks) suggests a higher failure rate than reported from studies in highly-controlled environments …”

These practitioners define success as “a tooth that survives for eight years in the mouth after having a root canal performed on it and, in addition, shows no external signs of infection.” However, not all infections can be observed externally, and if you define a failed root canal as one that has a bacterial infection (whether it’s showing external symptoms or not), most holistic or biological dentists will agree that almost all root canals fail, as all of mine did.

Why Do Root Canals Fail?

Dr. Weston Price tested thousands of teeth in the early 1900s. He demonstrated that all the extracted root canal-treated teeth he tested had pathogenic microbes and toxins. In addition, he found that they were impossible to disinfect, even though had already been extracted. Imagine the difficulty, then, of trying to disinfect teeth that are in someone’s mouth!3

More recently, Hal Huggins, DDS used DNA technology in order to identify multiple bacteria in root canal-treated teeth. This type of technology, which wasn’t available to Dr. Price a century ago, makes it much easier to identify anaerobic bacteria. 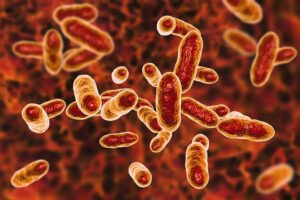 Anaerobic bacteria thrive in an oxygen-depleted environment, and they produce extremely toxic and lethal substances known as exotoxins.

Because the oxygen-providing blood supply is removed in a root canal-treated tooth, most of the bacteria that survive are called anaerobic. Of the 150 different bacterial strains found to be present in the pulp chamber of teeth, all but five are anaerobic.4

These types of bacteria thrive in an oxygen-depleted environment, and they produce extremely toxic and lethal substances known as exotoxins. There are several types of exotoxins that you are probably familiar with, including diphtheria, botulinum, and tetanus cholera toxins.

These exotoxins find their way into your bloodstream, where they have a selective predisposition to certain tissues. According to a study reported in Clinical Microbiology Reviews, blood drawn from patients following a root canal revealed that all of their blood contained anaerobic bacteria.

Even more alarming? Just one minute after an oral procedure, bacteria from the infected site may reach the heart and lungs. And when they find a favorable site, they begin to multiply.

Diseases associated with this process include:

These toxins and bacteria have also been linked to a host of other diseases including Alzheimer’s, arthritis, inflammatory bowel disease, and cancer.3

Because the nerve is no longer in a root canal-treated tooth, you won’t be able to feel any pain associated even if you do have an infection. For this reason, we recommend setting up a visit with a holistic or biological dentist who can evaluate it.

According to Mark A. Breiner, DDS, author of Whole-Body Dentistry,6 a procedure called E.A.V. (ElectroAcupuncture According to Voll) is invaluable for evaluating toxins and toxic levels in different organs and tissues. If possible, choose a natural dentist who is knowledgeable in this area. 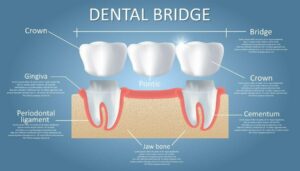 There are several alternatives that a dentist will offer if they recommend an extraction of your root canal-treated tooth, including a dental bridge or implant.

There are several alternatives that a dentist will offer you should they recommend an extraction of your root canal-treated tooth. This includes leaving the space open if it is a tooth located in the back of your mouth.

Other options to consider will be a removable partial denture, a permanently fixed bridge, or an implant.7 When considering these alternatives, be sure that the dentist performs bio-compatibility testing to ensure that the materials used in your dental procedures cause the least response from your immune system.8

In order to help you in your search for a well-informed holistic dentist, we have developed a complimentary guide: the Holistic Dentist Finder. It’s our way of helping you achieve the ultimate in health and wellness.

Read Next: If You’re Looking for Alternatives to Root Canal, Start Here 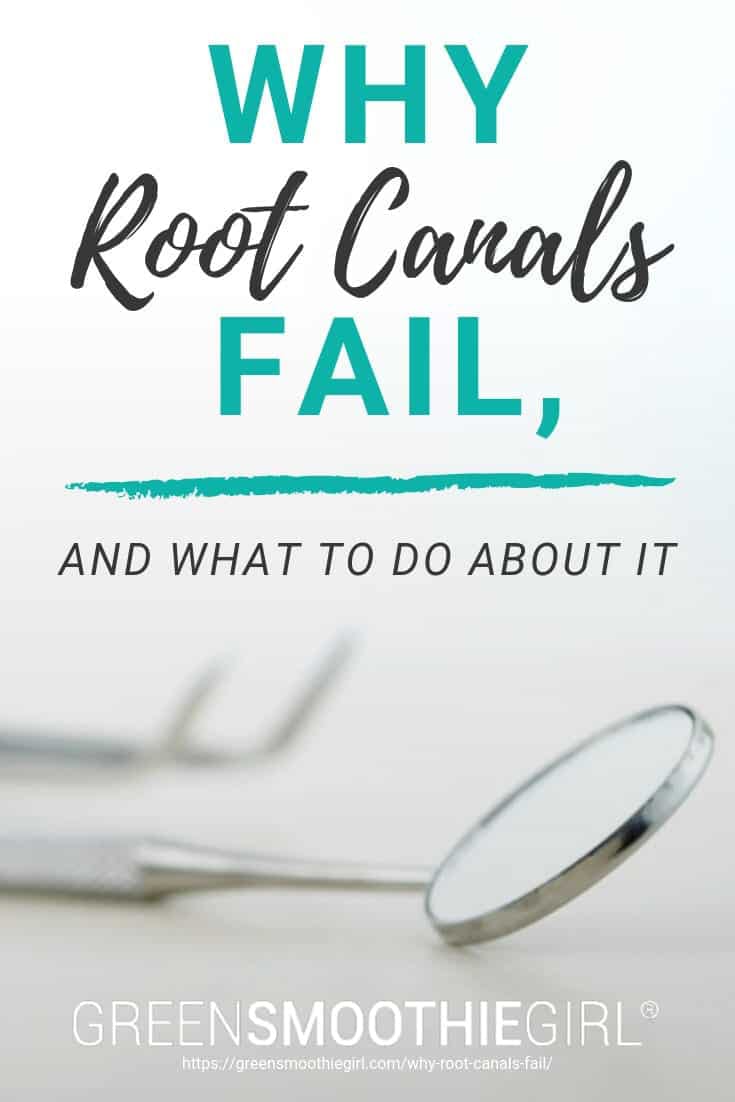 2. Rotstein, I. et al. Endodontic treatment outcomes in a large patient population in the USA: an epidemiological study. Journal of Endodontics. 12/2004.

4 thoughts on “Why Root Canals Fail, and What to Do About It”