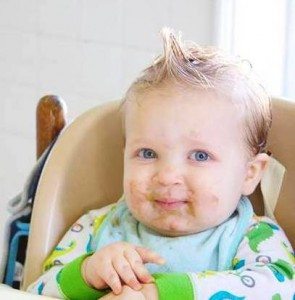 In our entries for the “Raising Healthy Eaters” contest was this sweet and amazing story from Ellen S. of St. Louis, Missouri. I love hearing that some of those who end up on my site, or in my lecture tour audiences, don’t just mix in a green smoothie to their Standard American Diet (which is still a good start, of course), but actually make a major, comprehensive lifestyle shift. I think you’ll be inspired by Ellen’s story:

First, I wanted to say THANK YOU! I came across your blog last winter when I was searching the internet to determine the root of my infant’s symptoms–constant runny nose, ear infections and overall discomfort.  I knew something wasn’t right when he had so much trouble with breastfeeding AND formula feeding. I wish I connected the dots before I gave up on nursing him.

Luckily, you were coming to my town soon so signed up for the seminar immediately!  I went in January of this year and never felt the meaning of the phrase “right time, right place” more than I did then.  I may have gone with the intentions of healing my family through nutrition, but I soon realized I was there because I needed healing–of mind, body and soul.

Ignoring the wall I was beginning to build between my husband because I couldn’t even look at myself in the mirror. All those emotions came flooding to me as I sat there listening to you speak. But as soon as I told myself I needed a lifestyle overhaul, I let my fear of failure dry up my tears and tell myself it would just be too hard.

Just minutes later, you called my ticket number and announced I had won the BlendTec. 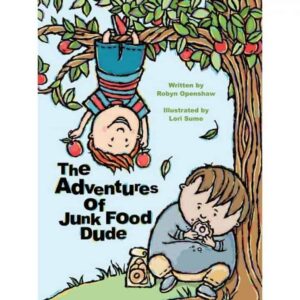 I was out of excuses, I knew what I needed to do. Since that day, I spent countless hours researching, planning and praying. I started small and got rid of the obvious crap in the house that was sabotaging a healthy way of life. And I read The Adventures of Junk Food Dude to my boys, then ages 2.5 and 9 months, every night.

About 3 months later in March (and a few failed attempts), I finally woke up ready one day.  With your inspiration and Dr. Fuhrman’s Eat to Live, I set out on my journey, dragging my boys along!

Fast forward to May and I was 40 pounds lighter, working out 4-5 times a week, actually SLEEPING at night, and finally feeling like I was living with no chronic pain.  I was 165 lbs. before my children, 190 after…and now 150!  But possibly the most exciting outcome was the health of my boys.

I switched to goat’s milk (as you did) for my youngest, and what seemed like instantly, his symptoms disappeared.  And my toddler was surprisingly thriving on this diet change.  I thought for sure we’d struggle to get him to let go of his chicken nuggets and extra sharp cheddar cheese (and we did, at times, struggle), but within months he was eating like Green Smoothie Guy and NOT Junk Food Dude!

I am proud to say he walks through grocery stores now shouting “that’s NOT healfy, Mama!” Unfortunately, he is usually pointing at items in other customers’ carts. We are working on “discretion.”

During this time we also discovered our son’s Sensory Processing Disorder.  It affects almost every aspect of our daily life, especially meal time.  I used to worry constantly about his diet, because he would not eat certain foods due to the texture, temperature or appearance of a food, and he constantly had tummy troubles.

Once I introduced him to smoothies, my worries vanished.  He LOVED smoothies and was finally getting veggies of all varieties in his diet. Now, he craves veggies and snacks on them all day long.  Smoothies have also become of trick for our once chaotic bedtime struggle.  His occupational therapist mentioned that sucking through straws is extremely calming, and a great trick for kids when overstimulated.

The light bulb went on and I added a “healthy chocolate cake smoothie” (as he calls it) of banana, cocoa powder and vanilla unsweetened almond milk to our nightly routine.

These are just a few ways this lifestyle has affected our family and I see more daily. […] I am so extremely grateful for you and your team’s hard work that I sing your praises wherever I go!