Dr. Caldwell Esselstyn of the Cleveland Clinic is a hero of mine. Former President Bill Clinton cites Dr. Esselstyn, a proponent of a plant-based diet as a solution to cardiac problems, as one of his inspirations to go vegetarian. As you know, President Clinton was triple-bypass survivor who gave up fried foods and hamburgers to “never eat anything with a mother.”

Although I don’t specifically advocate for vegetarianism, I’m supportive of Dr. Esselstyn’s plant-based diet, and none of my recipes in my own 14 books have meat in them. It’s not that I don’t think you can be very healthy eating an entirely plant-based diet. I also think you can be healthy eating reasonable amounts of organic, free range, or wild caught animal flesh. The reason my recipes don’t have animals in them is that you already know how to eat meat—I don’t need to provide you those recipes, because you already have them. We have no lack of knowledge about how to prepare meat, in our culture. My goal is to help you eat more plants—easily, inexpensively, and deliciously.

Dr. Esselstyn argues that green smoothies should be avoided, because their fiber is pureed, destroying helpful properties.

In my research published in The Green Smoothies Diet, one of the top 3 health benefits my 175 participants reported, is improved digestion. We defined that as soft, formed stool, and increased throughput. I cannot find any evidence that fiber is “destroyed” just because we blend it. With all due respect to Dr. Esselstyn—he and I are on the same team, teaching people whole plant foods!—green smoothies are a fantastic way, in a fast-food world, to massively increase consumption of greens, and plant foods in general. I’ve found that while most people won’t sit and plod their way through a plate of kale, chard, and collard greens, they will almost always drink a green smoothie.

Esselstyn also says that fructose in the fruit contributes to inflammation and hypertension. 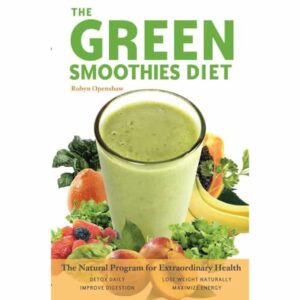 On the contrary, lots of evidence, including numbers from many GSG Detox participants (we’ve had several thousand since August, 2013) are that inflammation and hypertension often decrease by eating high-fiber, raw plant foods, rather than the many animal foods and processed foods dominating the Standard American Diet.

I just read all of the questionnaires from the past month of people completing the Detox, and one included a participant’s blood pressure dropping into beautiful normal numbers and his cardiologist taking him off meds, after only a week on the Detox. He remains in the low-normal range after completing the program. (While this is an interesting story, it is not intended as advice, so please seek competent medical advice for your own health concerns. Getting off meds should be supervised by a doctor.)

Victoria Boutenko’s research published in Green for Life, with 30 people who started drinking a quart of green smoothie daily, showed that blood pressure decreased and inflammation did, too. Perhaps Dr. Esselstyn’s claim is related to eating concentrated fructose and other sugars (like in corn syrup and agave), rather than the whole fruit, with fiber and micro-nutrients, accompanied by lots of greens in the smoothies I teach.

I calculated how much fiber is in a quart of green smoothie, and it’s about 12 grams. That’s more than the average American eats in a whole day!

Of course, if you make a fruit smoothie with a handful of greens thrown in, that’s not what I call a green smoothie. I agree with Dr. Esselstyn that fruits should be minimized. I don’t agree that fruits need to be eliminated (perhaps except for some Type 1 diabetics or very rare conditions).

I like my smoothies to be REALLY GREEN. I’m not drinking them for entertainment, after all—I’m drinking them for the health benefits. I also love to put a scoop of GreenSmoothieGirl protein, and also our TriOmega (it’s back!)–sprouted broccoli, chia, and flax seed, for their high essential fatty acid content.

Lots of folks have major jaw and dental problems in North America and Europe, after several generations of eating so much processed food. (Prehistoric man had a wide, strong palate and teeth that could grind up nuts, greens, berries, and meat easily.) With these challenges, a pre-masticated green smoothie may be just the ticket. I love Dr. Esselstyn’s work, but I stand by my premise:

A quart of green smoothie a day increases micro-nutrients in the diet by 700% compared to the average American. And that’s almost categorically a good thing.

See my YouTube video HERE for more about the Great Green Smoothie Debate.