Libby and the Garden

I have this photo of me and my younger daughter, Libby, working in my garden about five years ago, when I first put the site up. The photo is in Chapter 5 of 12 Steps to Whole Foods. She looks so little. And now she’s turning 15. 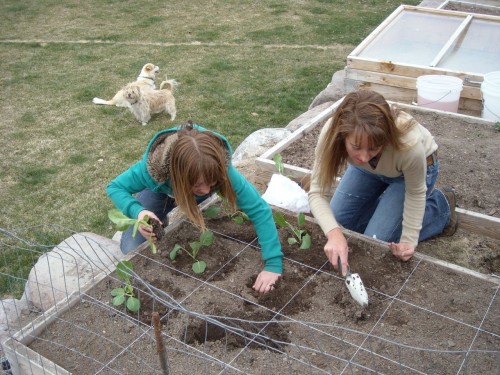 Some time ago, Libby discovered that if you get a little rectangular piece of plastic out of Mom’s purse, it buys you lots of video games, movies, and songs on iTunes! Exciting! She did that, to the tune of over $1,000, in a four-week period, until my statement arrived. At which time, Libby and I had a rather intense little chat. Neither Apple nor MasterCard wanted to cut me any slack on that situation. I had to pay it.

There’s been a chart in my office for 18 months now, where Libby marks off every extra job she can do, with a value assigned for that job, taking it off the big, ugly total. Today she organized my pantry for 2.5 hours for $25 off her chart. She is leaving for camp, so she made me two quarts of green smoothie to drink while she’s gone, for $5 off the still-significant total.

She’s learning the value of $1,000. She’s chipping away at that debt to me and learning that using the little plastic card isn’t as fun as she thought. Part of our deal is that every time I give her an extra job, she isn’t allowed to complain. She has to say, “Thank you for the opportunity.”

So today we had this convo:

Libby:  So, where will I get the greens to make the smoothie?

Me:  In the garden. There’s tons of spinach out there, and pick the bigger kale leaves too, okay?

Libby, wailing:  MOM! NO! I hate the spiders! You know how much I hate them!

(Libby’s been pulling weeds out there most days since school got out. There’s always drama associated with garden tasks, and spiders inevitably come up.)

Me:  Lib. We’ve been over this. They’re just little garden spiders. Harmless! In fact, if we didn’t have them, we wouldn’t have our garden. They keep the pests in check. You’ve got to get over this. Working in a garden is part of life. It’s important.

Me:  Because. That’s how we grow food.

Libby:  That’s what grocery stores are for!

Yes, my child who was raised with lots of garden produce every summer of her life, working with me in the garden, pulling whole boxes of weeds, she actually said that. “That’s what grocery stores are for.”

I didn’t say anything, because I was shocked at that entitled, city-girl comment. When she comes back from camp, I’m going to tell her how I love to observe the complicated, teeming ecosystem in a garden, this time of year. Just a few months ago, the ground was frozen and nobody was moving around on top of the earth, here in Utah.

Now you can see millipedes, ladybugs, spiders, aphids, worms, and lots of other critters just filling the measure of their creation,  milling about, avoiding the bigger guys and trying to eat the smaller guys—in my square foot garden. It’s so cool, really.

“Spiders are our friends,” I tell my kids. My mother never let us kill a spider, even in the house. We had to Catch and Release. She caught spiders in jars and took them outside.

I’m going to suggest to Libby to challenge her fear and let a small one run around on her arm sometime when she’s out there. That’s how I conquered my own fear of spiders.

That, and we caught a big tarantula in September in our driveway. We bought a terrarium and I confronted him every day, changed his water, named him, talked to him, and became actually rather fond of him before he died the next February.

I’m going to tell her that every square in the garden gives us food that’s practically free. And better yet, we know it has absolutely no chemicals on it. When I cut spinach and rinse it, blend it, and drink it, I’m getting the freshest, most nutrient dense food possible.

And when we put our hands in the dirt, we’re grounding ourselves. Getting rid of the buzzing, negative electrical energies clinging to us. Letting atoms with missing electrons pick them up. Getting ourselves a mega-dose of antioxidants.

That, and the fresh air and smells of dirt and green plants, and oxygen. That, and the Vitamin D being produced on the surface of our skin, from the sunshine. Might be why we feel so good after gardening outside for a while. Plus there’s that “sense of accomplishment” having so directly contributed to our own sustenance and survival.

I hope you’re doing Step 5 of 12 Steps to Whole Foods. It’s not just about how to garden organically, in any space, but about how to use everything in the garden, too, in new ways.

Of course, all that is fun—planning, shopping for seeds, planting, dreaming of what you’re going to make with your fresh vegetables—but the harvest? That’s where the real fun is.

Make sure your kids know where food comes from. Make sure they know the value of free, organic food that is made all the more delicious by the little bit of labor you put into it.

I feel a little Mama Lecture coming on, for Libby, in a couple of days!

My Mama Fantasy is that it ends with a commitment to get peaceful with spiders, and this statement:

“Thank you for the opportunity.”

8 thoughts on “Libby and the Garden”