Birthdays don’t have to be corn syrup hell

This summer has been a whirlwind. Lots of activities and travel, and, oh I don’t even know why. BIRTHDAY SEASON has snuck up on me. That’s the three

weeks of August where ALL FOUR of my kids seem to require some attention, gifts, and a party.

The only pregnancies that “stuck” were the ones that commenced in November.

(I lost several along the way that were due when people PLAN pregnancies—in the spring!) Finally with my baby, Tennyson, we gave up on planning and just went with what worked: August babies.

So I rented Big Screen Game Center for a dozen boys to play video games on giant screens. We had the usual stuff everyone else serves at birthdays, except I also had a big veggie tray and Tennyson had to eat a boatload of veggies before eating the birthday pizza-and-cake. I didn’t do ice cream, soda, candy, or treat bags, or a piñata.

It still wasn’t good. I’m not proud. With Colorado right before, and Pacific Northwest right after, I didn’t pull off Chocolate Beet Cake this year. (Ch. 11 of 12 Steps.)

I did send the remainder of the pizza and cake home with the first parent to show up at the end of the party. I did manage to not eat any of it myself. 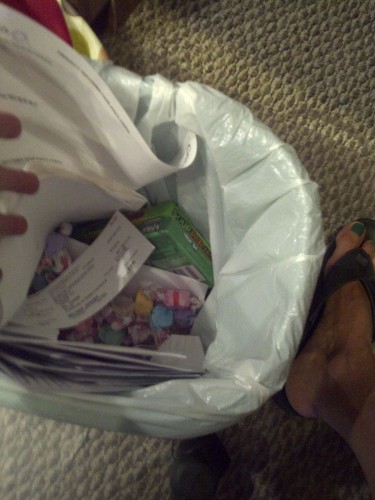 And Tennyson received, as gifts from friends, a bag of taffy, two

movie-sized boxes of candy, and a $10 Coldstone gift card.

Apparently it could have been worse. Dallin, who we once terrified by

driving down a steep hill and screaming, while pretending to lose control of

steering and brakes, said to me:

bunch of candy. My parents said it would be ‘inappropriate’ for your

child.'” LOL! Some people didn’t get that memo.

That’s okay. I bought the $10 Coldstone card from Tennyson.

Sheryl, my customer support manager, said, “Just regift it—isn’t the gift about what

the person wants, not what we want them to have?”

Yep. Done. I agree, and I’m not above regifting to a Coldstone fan.

But the candy? I paid Tenn $5 for the privilege of round-filing it, as you

One boy heard me tell Tennyson the figure I would give him, and Tennyson’s

Halloween candy for the privilege of getting drugs off the streets, asked:

“Do your kids ever get mad or refuse to let you buy their candy?”

Nope. They never have. They universally have preferred the buying power of

$20 over a bunch of junk. Plus I’ve done this their whole lives.

If you buy and feed your kids sugar, you lose that power. They’ll demand it,

regularly, forever. Nag, whine, drama. They know they can work you over.

In my house, there simply isn’t any sugar or white flour. We do have “fun

foods” sometimes—they just aren’t made with refined or processed garbage.

I think what they get at their dad’s house, at church, at school, at

parties, is excessive already. Why would I offer more of it in my HOME?

depressed, fat, and fuzzy-headed with high-fructose corn syrup. (That’s the

I like Chocolate Beet Cake better than buttercream-frosting cakes anyway. If

you quit eating corn syrup (HFCS) for a period of time, even a few weeks,

and observe the reaction of your body and mind when you eat it again, you

will know with certainty how much your body hates it.

Your body loves you when you say no to HFCS. It’s not just highly refined,

It inflames your cells. It ages them, and it erodes your gut lining. I never eat it anymore.

Even before I undertook the One-Year $10,000 Sugar Bet with Matthew nearly

11 months ago, I’d completely quit eating HFCS. Not only do I academically

know too much about its detrimental effect on health, but it sends my

lifelong anxiety, completely under control on whole foods, into

instantaneous orbit. NOT WORTH IT!