How I Spent My Summer Vacation

Last week Tennyson had a close encounter with a curb he tried to jump on his bike. I had his broken tooth repaired later that day. Everything scabbed over and his giant fat lip was subsiding, when he got stung by two wasps at a baseball game.

Here’s a photo of him 18 hours later. His friends were in my bedroom late last night poking and prodding Tennyson’s enormous dome. My oldest daughter Emma can’t stop saying, “Awwwww!” and hugging him. 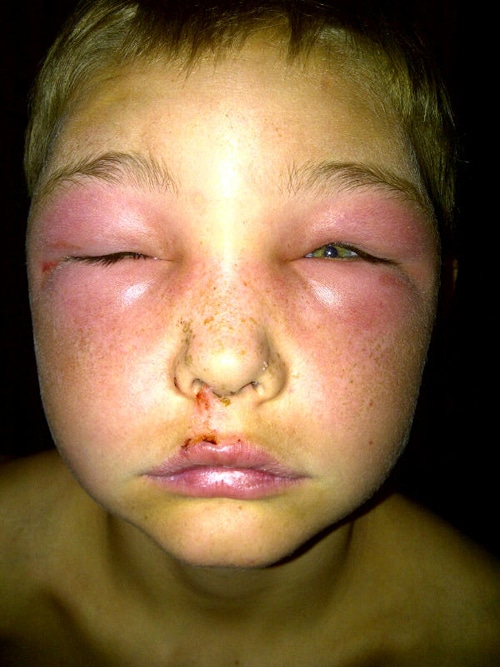 The next morning was his first day of school. I didn’t have the heart to make him go. It’s a new school, with kids he doesn’t know. He had a new outfit picked out, ready to walk in the first day, all cool, parking his new ride (an electric scooter).

Talking to other people who’ve had similar reactions to wasp stings, it’s going to take a week to subside. I can’t let him stay out of school for a week.

He looks just like Will Smith in Hitch. I told him about Gwyneth Paltrow in the movie Shallow Hal, too. She wears a fat suit and has the eye-opening experience most beautiful women never experience: learning how people treat the obese.

I said, “See, Ten, you could have a once-in-a-lifetime experience like that. You get to meet people and find out how they treat you that’s DIFFERENT than when you’re your good-looking REAL self. You could do a school project on what it’s like. A week later, your face will be back to normal and all the girls will be like, ‘Alien Boy is HOT, who knew?!”

He was unimpressed with my idea.

So instead I went to have a t-shirt made with last year’s school picture on it. That way he could wear it to his new school on his first day and show people, “This is what I REALLY look like!”

(I spent all afternoon on it. As you can see by the photo, he was still unimpressed.)

Hopefully this way, though, he won’t be traumatized for life and tell a shrink when he’s 43 and still lives in my basement that everything went wrong the day his head swelled up like a watermelon and his mom made him go to school anyway.

(After 18 hours, when it had only gotten worse instead of better, I finally bought some Benadryl. It did nothing except make him sleepy.) 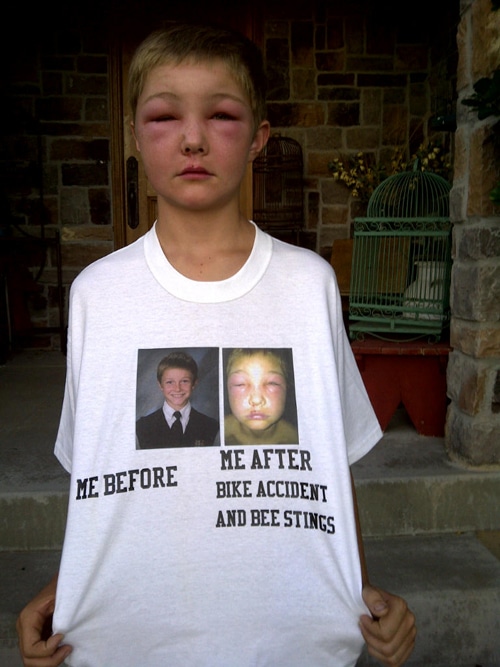 4 thoughts on “How I Spent My Summer Vacation”