Top Proven Ginger Health Benefits, And My Favorite Ways To Use It 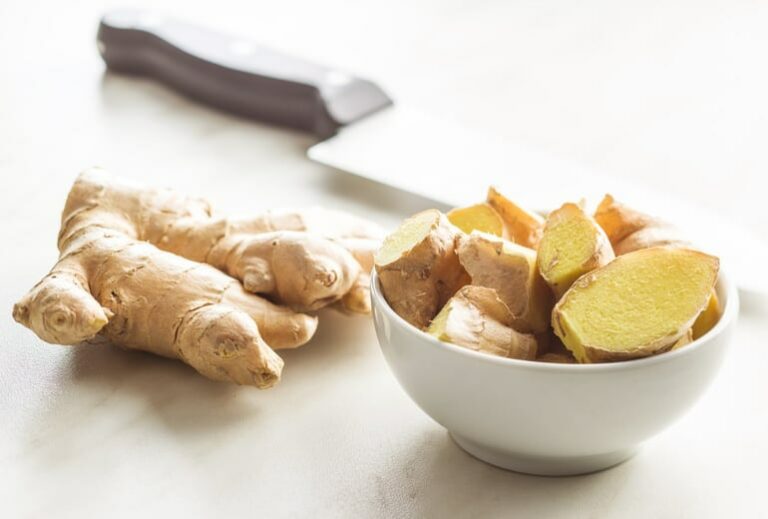 What comes to your mind when you think about ginger? For me, it’s the intense, peppery, sharp, smell followed by that distinctive spicy, warming taste and sensation on the palate.

You’ve probably used it when cooking Indian- or Asian-inspired dishes, but ginger is a lot more than a flavorful ingredient; research shows that it’s also a superfood with health benefits that range from promoting healthy blood sugar levels to preventing heart disease and helping reduce the risk of cancer.

Let’s take a look at the proven healing properties found in ginger, and how I like to use it, almost every day!

Ginger has been used in Ayurvedic medicine (India’s ancient healing system) for thousands of years. According to an old Indian proverb, “Everything good is found in ginger.”¹ That saying really holds true when it comes to cleansing the body. Because of its warming qualities, ginger stimulates digestion, increases circulation, and promotes sweating, all of which clean the body of waste and toxins. 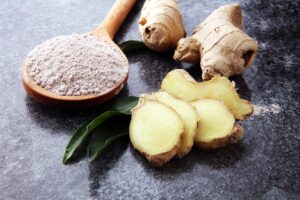 Ginger is an easy addition to all kinds of recipes.

Ginger contains powerful cancer-fighting compounds called gingerol, paradol, shogaol, and zerumbone. In recent years, studies have focused on how ginger prevents and suppresses the growth of various cancers, including lymphoma and cancer of the pancreas, kidney, breast, skin, liver, and bladder.

We all produce cancer cells every day–a healthy person produces about 50,000 per day–so we all need help to break down and eliminate these aberrant cells before they become tumors with vascular systems.

The results of these cancer studies are encouraging.² For example, a 2015 study published by the Public Library of Science revealed that a component found in ginger, 6-shogaol, is superior to conventional chemotherapy in targeting breast cancer stem cells—cells that are capable of splitting off to create new tumor colonies. These cells are often resistant to conventional chemotherapy, so these findings were significant.³

The secret to ginger’s effectiveness is the fact that it contains potent antioxidants—25 in all—that prevent cellular damage caused by free radicals and oxidative stress. Fruits, vegetables, and herbs such as ginger are antioxidant superstars that have also been shown to reduce Alzheimer’s, diabetes, and heart disease.

While cholesterol helps us build new cells and produce hormones, too much of it, like most things in life, is not a good thing. Our liver creates all the cholesterol we need; if we add an additional dollop from a diet high in saturated fat (found in fatty meats and dairy products), it can build up in the arterial walls and lead to heart attacks and strokes.

So, where does ginger come into this scenario?

Study on Ginger And Cholesterol

A study conducted on 95 participants revealed that those who took ginger showed remarkable reductions in triglyceride and LDL cholesterol, both of which are linked to heart disease. Even more remarkable was the fact that there was a significant increase in HDL, the good cholesterol that actually clears bad cholesterol from the blood.4

4.   Ginger May Reduce Pain and Inflammation

Some inflammation can be a good thing; when you injure your ankle, swelling is a sign that white blood cells are rushing to the area and doing their job.

What you don’t want is chronic inflammation, which is associated with conditions like arthritis, ulcerative colitis, psoriasis, cardiovascular disease, diabetes, obesity, Alzheimer’s, and cancer.

Ginger contains compounds and enzymes that reduce inflammation, relieve pain, and relax the muscles. Researchers have studied these benefits and shared some exciting findings: 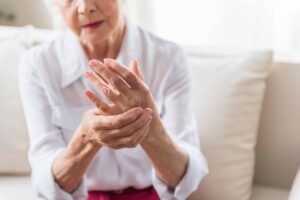 5.   Ginger Can Protect Against Alzheimer’s and Cognitive Decline

When it comes to age-related cognitive decline, ginger shows a lot of potential. It seems to help prevent and counteract the effects neurodegenerative diseases such as Alzheimer’s. Here are some worthwhile findings:

If you’ve sipped hot ginger tea at the first sign of a cold, you’re probably familiar with the soothing effects that ginger provides, as well as its ability to remove mucus from the throat and open up your airways.

What you might not know is that ginger is antimicrobial, so it fights off the bacteria and viruses that cause respiratory distress in the first place.

One specific illness that ginger is known to be effective against is a Respiratory Syncytial Virus, better known as RSV. This common and dangerous infection of the lungs and respiratory tract infects mostly children, under the age of two. A study on the effects of ginger on RSV concluded that fresh ginger blocks the virus’s ability to attach, which counteracts the infection and keeps the body functioning properly.12

High blood sugar levels are associated with diabetes as well as heart disease, strokes, loss of vision, kidney disease, and damage to the nervous system, so it’s definitely something to be avoided. Ginger is a fantastic ally in this effort. 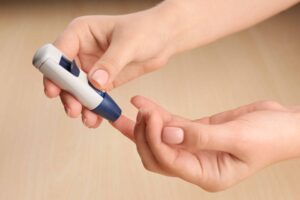 Ginger’s positive impact on blood sugar levels is especially helpful for those with diabetes.

One of ginger’s most well-known benefits is its ability to improve digestion. The key, once again, is gingerol, which helps stimulate the saliva in your mouth and increases the bile and gastric juices that digest fat and proteins.

Ginger also contains important enzymes such as zingibain that aid in breaking down the food we eat, decreasing the time it takes to pass through the digestive system and allowing the nutrients it contains to be readily absorbed.

When the digestion process slows down, causing food to sit in the stomach for too long, you get indigestion, so ginger can do a lot to prevent that discomfort. In one study, researchers found that ginger accelerated the emptying of the contents of the stomach.14

Ginger also helps reduce gastroesophageal reflux (better known as heartburn) by improving the function of the esophageal sphincter. This muscle acts like a valve and keeps burning stomach acids from entering and harming the soft tissues of the esophagus.

This is good news for women everywhere!

In one study, 150 women who experienced painful periods known as dysmenorrhea were divided into three groups. One group was given ginger four times a day for three days, one group was given mefenamic acid (a prescription drug used to treat menstrual pain), and the final group received ibuprofen.

All groups showed effective pain relief, and the researchers concluded that ginger is as effective as mefenamic acid and ibuprofen in relieving menstrual pain (without the negative side effects of those medications).15

Ginger is commonly used to treat the nausea associated with motion sickness, morning sickness, and chemotherapy, but is there any truth behind this remedy? Science backs it up as an effective supplement. 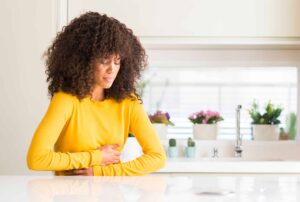 Can You Have Too Much Ginger?|Ginger Side Effects

As is so often true, when it comes to ginger, it’s possible to overdo a good thing:

Doses of ginger exceeding 5 grams a day can lead to an upset stomach and an increase in gas.

Ginger may interact with blood thinners, so be sure to talk to your primary care provider before adding it to your diet if you take medications such as Warfarin.

Because of its blood-thinning properties, you may also want to avoid ginger if you are pregnant and close to delivery. While it appears safe to consume earlier in pregnancy, it’s always best to talk to your healthcare provider before adding herbs and other supplements to your diet when pregnant or breastfeeding.

Many of the symptoms and diseases ginger helps alleviate can be attributed, in part, to lifestyle choices. If we opt to embrace the healthiest lifestyle possible by eating a plant-based diet, being active every day, detoxifying a few times a year, and limiting stress in our lives, ginger can be a superfood to add to a healthy diet rather than a pill we take after disaster strikes.

How To Use Ginger and Ginger Root

How To Use Ginger in Green Smoothies

I take about an inch of the root, trim the outside skin, and toss it into my daily smoothie. It adds a refreshing flavor and a little zing, and I can feel my cells responding to its many nutrients.

Here are three of my favorite recipes for using ginger in green smoothies:

How to Make Ginger Root Tea

To get the best taste and benefit from ginger tea, you’ll need to do more than steep a piece of fresh root. Instead, cut a peeled 2-inch piece into several thin slices, and simmer in a medium saucepan with about 4 cups of water for 15 minutes.

You can strain and use a cup or two right away, while keeping the rest in the fridge for later use. This tea is also a great base for other tonics like Mum’s Magic Elixir or Inflammation Tamer Tonic. 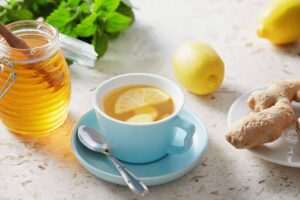 Ginger tea is a soothing drink on cold days.

How to Choose The Best Fresh Ginger

Be sure to pick ginger from your local store that is firm and fresh. Smaller, younger rhizomes are juicier and have thin instead of thick and fibrous skin. Pick pieces without wrinkles and be sure to keep your eye out for any mold.

How To Store Ginger Root

Ginger stores for up to three weeks in the fridge if wrapped in a paper towel and then placed in an open container. You can also peel and freeze perfectly sized chunks that can be tossed into your morning green smoothie along with your frozen fruits and banana.

For the freshest possible ginger, you may want to consider growing a ginger plant. It’s best to start this easy-to-grow perennial with a living ginger root that’s available at nurseries. This tropical plant loves filtered sun, humidity, and moist soil. If you live in colder climates, this warm-weather loving plant can be grown indoors.

After a few months, small pieces can be harvested. After a few years, you’ll have an abundance of ginger and a great-smelling windowsill.

Ginger is more than just a versatile spice! It’s a true superfood, with proven benefits.

Read Next: How To Naturally Detoxify Your Body 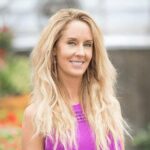 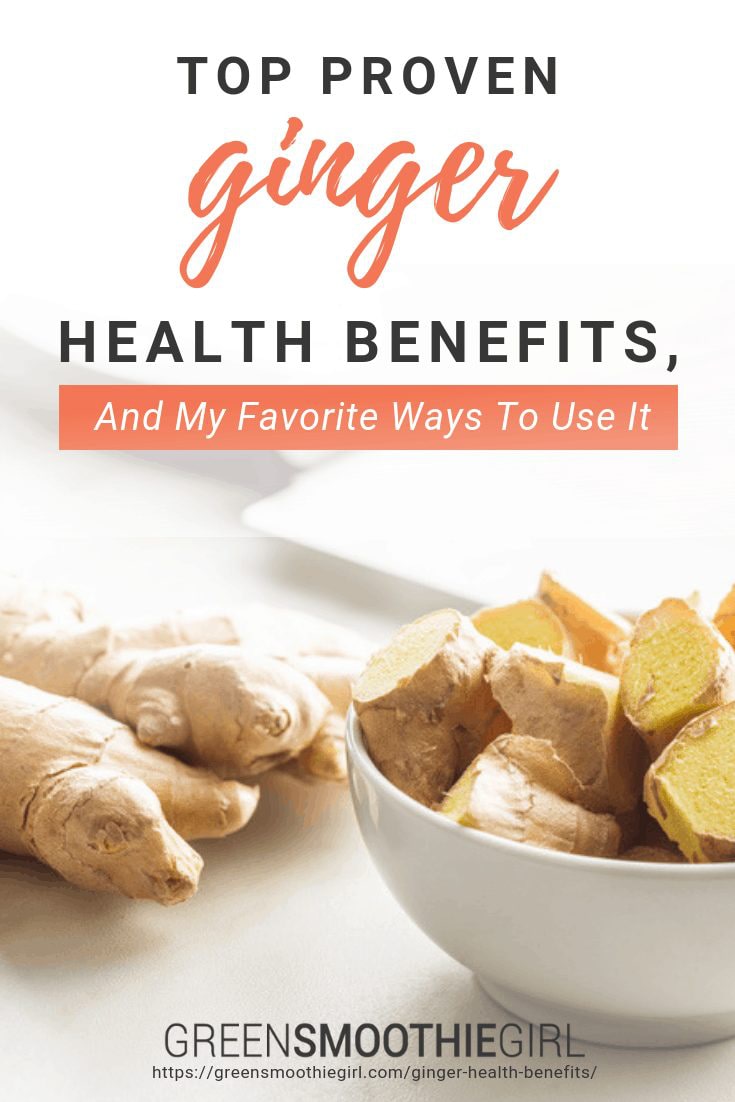 6.   Rahmani, Arshad H. et al. Active ingredients of ginger as potential candidates in the prevention and treatment of diseases via modulation of biological activities. International Journal of Physiology, Pathophysiology and Pharmacology. 07/2014. https://www.ncbi.nlm.nih.gov/pmc/articles/PMC4106649/

14.   Wu, KL. Effects of ginger on gastric emptying and motility in healthy humans. European Journal of Gastroenterology and Hepatology. 05/2008. https://www.ncbi.nlm.nih.gov/pubmed/18403946

18.   Viljoen, Estelle et al. A systematic review and meta-analysis of the effect and safety of ginger in the treatment of pregnancy-associated nausea and vomiting. Nutrition Journal. 03/2014. https://www.ncbi.nlm.nih.gov/pmc/articles/PMC3995184/

6 thoughts on “Top Proven Ginger Health Benefits, And My Favorite Ways To Use It”