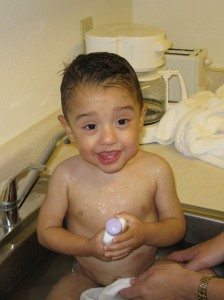 Little Luke in the sink for his shower.

This is a story by Dr. Michelle Jorgenson, a GSG reader in Highland, Utah, whose story is featured in the intro to How to Raise Healthy Eaters. I think you will find it inspiring:

One of my pet peeves is when people say, “I try to help my family get healthy, but they just won’t eat that kind of food.”

You aren’t punishing them by giving them healthy food to eat.  You are giving them a gift.  I have personal experience with a child who was literally “starving” on the typical kid diet of chicken nuggets, mac-n-cheese, french fries, and white bread.  This child is my son Luke.  We adopted him when he was 2 1/2 years old.

He could barely walk, and he couldn’t talk–not even one word, and doctors thought he was autistic. When we first brought him home, I had him tested by an early intervention center, and he tested at an 8-month old level on everything. He was so tiny. In fact, the first night I had to bathe him in the sink at our hotel because he was too little for the shower. 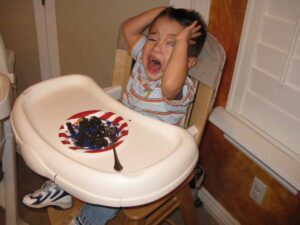 He’s Latino, so most people ask what country we adopted him from.  Well, Luke was from Las Vegas, Nevada.  Last I heard, that wasn’t a third world country!  He did have a rough start in life: he was born severely premature at 25 weeks. His birth mother was single, with very little money and very little help.  I think it’s a miracle that he lived that first year: feeding tubes, oxygen at night, surgeries. He is a fighter!

But the prematurity wasn’t the only thing to blame. In fact, most kids catch up from a premature birth by 3 years old. Luke was nowhere near catching up. In the short few hours I had with his birth mom, I found out what they had been eating. Things food stamps buy: bread, crackers, cereal, bananas, peanut butter. Add in chicken nuggets and french fries, and you have his entire food chart. Our first meal with him made me cry. He shoved the food in with two hands, as fast as he could eat. There was no way he was even swallowing. He ate at warp speed until he was sick. This continued for many months.

He wanted what he was used to: crackers, bread, anything carb-loaded and white.  He was eating so much food, and was still so tiny, and so hungry. 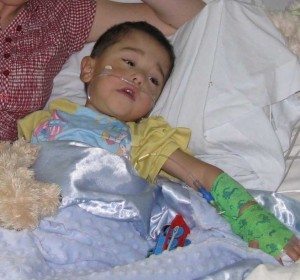 That first night I also noticed a strange sound in his belly. We scheduled to see a pediatric digestive system specialist. He found that one of Luke’s early surgeries had failed, and Luke’s stomach had moved up to where his lungs should be. He had to have major surgery to put everything back where it belonged. After the surgery, they told us his diet would be restricted.  He couldn’t eat all those simple carbs anymore–they would go straight through. 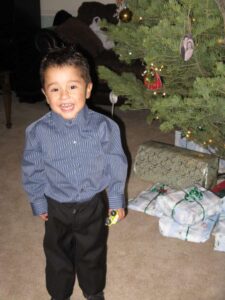 This was right about the time I found Green Smoothie Girl and was contemplating some serious family diet changes, so the timing was perfect.  We added green smoothies every morning, and he liked them. We also started eating more and more vegetables in every meal. He still ate ravenously, but it changed to anything green! He couldn’t get enough broccoli, green beans, asparagus, peas, lettuce. He loved them all. He started avoiding the carbs on his own: he would leave bread uneaten on his plate on any occasion it was given to him. 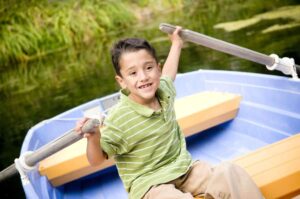 Other things started changing, too. He started using sign language, and then finally, words! He started to grow a little. His motor skills improved and his behavior seemed to mellow some. Something was making a difference.

Luke still has his challenges, but food is no longer one of them. Now he is a thriving 7-year old who loves anything green and will eat veggies over anything else he’s offered. He turns down sweets, carbs and most meat. He is small, but he is growing, and I know it’s because he is actually getting fuel. 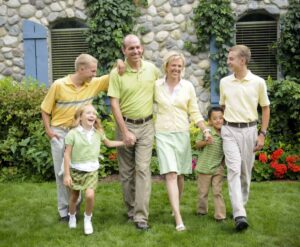 The Jorgenson family, happy and healthy.

He does well academically and is not autistic.  He is coordinated and has excellent motor skills.  He is a different boy than the one eating the standard diet of most American kids.

If I had let Luke continue avoiding the food that his body needed, who knows where he would be today. We owe it to our families to help them get what they need to be as happy and healthy as they deserve to be.

Be tough and do right by your family to make nutrition changes. It’s worth it! 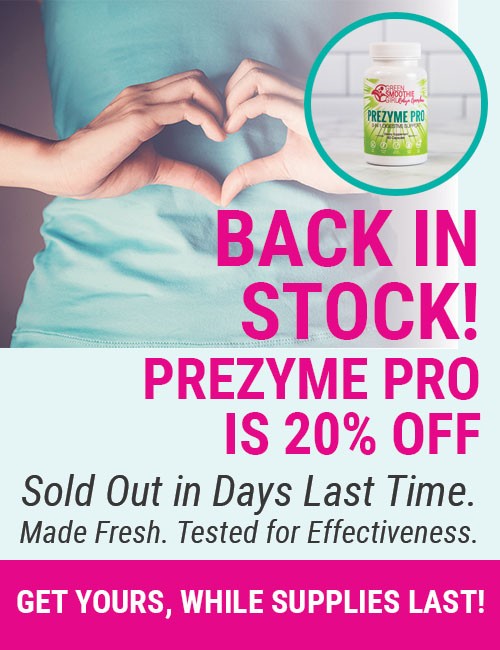