What Are Anti-Nutrients, And Should You Worry About Them In Your Food? 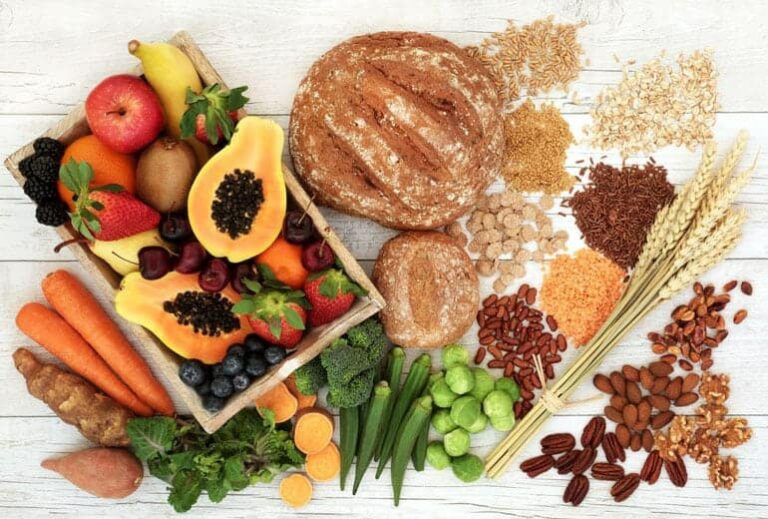 One of the most confusing controversies in the world of health and nutrition is the debate about ANTI-NUTRIENTS. Recent scare tactics about these “anti-nutrients” originate primarily from reductionistic thinking, circulated on the internet by a few “experts” theorizing. The sad consequence is that many consumers fear the most nutritious whole foods in the world.

While reports that all grains, legumes, and many fruits and vegetables contain anti-nutrients are true, the demonizing of these whole foods as dangerous is evidence that you aren’t being told the whole story. Anti-nutrients are natural or synthetic compounds found in different foods that interfere with the absorption of minerals, vitamins, and other nutrients.

No one addresses this issue more logically than my friend Jim Simmons, whose book Original Fast Foods I highly recommend. During an email exchange I had with Jim, he wrote:

“Research now supports the idea that anti-nutrients are nature’s way of helping us to be more intuitive in our eating patterns. For instance, some spinach is really good for you, but as you consume too much, the level of oxalates will build up in your bloodstream to a point that a signal will be sent to your brain and then a signal is sent from the brain to your endocrine system.

The long and the short is, you will lose your appetite for spinach until the level of oxalates drops enough that your taste for spinach is turned back on…. don’t get too complicated in your eating habits.”

Anti-nutrients are in most, if not all, whole foods. This does not mean they are bad, scary, or to be avoided.

In fact, avoiding the very foods that contain anti-nutrients will put your disease risk through the roof. They happen to also be the foods highest in fiber, micronutrients, and all disease-preventative compounds. Synergistically, the hundreds of phytonutrients, vitamins, minerals and enzymes in the same foods that contain goitrogens or oxalates, keep you slim, healthy, and clear-thinking till you’re old.

Anti-nutrients, as they are popularly referred to, possibly poorly named, serve an important purpose in the overall chemistry of the plant and in its delivery of phytonutrients to your body. 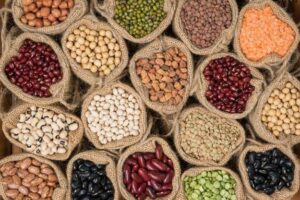 Most grains, seeds, legumes, and nuts have phytic acid.

Science actually knows very little about these anti-nutrients that some say rob your body of minerals, causing unnecessary fear among consumers in the past decade.

Phytic acid is found naturally (in varying degrees) in most grains, seeds, legumes, and nuts, but our bodies don’t produce the enzyme to metabolize and absorb it.

Phytate is a naturally occurring compound found in plant-based foods such as grains, beans, nuts, and seeds. It is recognized by the presence of phytic acid. Phytates can react with certain minerals (like iron, calcium, magnesium, and zinc), and some carbs and proteins, binding to them and making them less available for our bodies to use. (1) This is why the Paleo diet community, in particular, has demonized them as harmful.

However, research doesn’t support avoiding phytates. In fact, the evidence is clear that they are, in fact, helpful and important, particularly as a defense against kidney stones (by absorbing excess calcium), lowering cholesterol, (2)  as an antioxidant, (3) and even protecting against cancer. (4)

In many cases, it is the very quality of binding to excess minerals that makes phytic acid beneficial.

How to Neutralize Phytic Acid

If you’re still worried about phytates, it’s easy to neutralize them in your legumes, seeds, and grains–soaking or sprouting them for a few hours or overnight activates the enzymes that break down phytates.

Lectins in Grains and Legumes

The “Eat Right for Your Blood Type” and Paleo movements are responsible for the panic over lectins, which are proteins in raw grains and legumes that help cells stick together. Lectins have been blamed for causing a host of health issues, particularly leaky gut, and autoimmune disease.

However, as with phytates, lectins are neutralized with soaking, sprouting, and cooking.  It’s almost unheard of to eat legumes like kidney or pinto beans in their raw state, which is when lectins are active.

The Downside of Avoiding Legumes and Grains 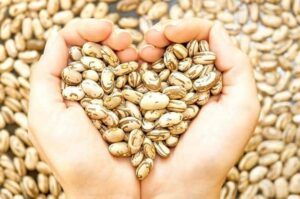 Except for in the case of certain health concerns, legumes and grains should never be intentionally eliminated from a healthy diet.

The risks of eliminating grains and legumes from the diet for fear of easily-managed “anti-nutrients” are far worse than the anti-nutrients themselves for the vast majority of us.

Dr. Michael Greger | How Not To Die

In his book How Not To Die, Dr. Michael Greger documents thousands of studies proving that the healthiest people on the planet consume grains, legumes, and other plant foods.

Speaking of grains and legumes in particular (the food groups most associated with lectins), he cited the recommendation of nine independent research teams analyzing half a million studies – to eat whole grains and/or legumes with every meal for cancer prevention. (5)  Every meal.

In a recent podcast interview I did with Joel Fuhrman, MD, author of Eat to Live and three other New York Times bestsellers, he explained that residuals of legumes attach to the villi in our stomach, and are our top defense against gut disease. And that the anti-lectin fear-mongering is nothing more nor less than a fad. 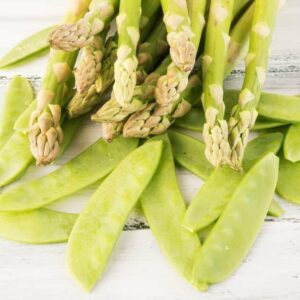 Asparagus and peas are good sources of purines.

These compounds are associated with protein and are ubiquitous in our cells and most foods. Moderately high purine-content plant foods include beans, lentils, asparagus, peas, oatmeal, and cauliflower.

Purines are necessary and good, but in concentrated amounts can cause problems for people with gout and a few other very specific illnesses.

Several researchers, including Choi, published in the New England Journal of Medicine, have found that plant proteins do NOT increase gout risk, while the high-protein organs and flesh of animals, do increase gout symptoms. (6)

It’s a non-issue unless you have a nutrition-related health problem that affects your purine metabolism.

Especially for children and infants, problems that may warrant looking at reducing foods containing purines may include autism, cerebral palsy, deafness, epilepsy, recurrent infections, or anemia.

In those cases, a doctor may limit purines to 150 mg or less. (Keep in mind that MOST cases of those illnesses have nothing to do with purines.) 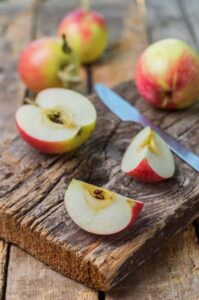 Apple seeds contain trace elements that our bodies need and are equipped to handle.

True, cyanide is in apple seeds.

Cyanide is actually a trace element our body needs. What’s in apple seeds is a tiny amount, and your body breaks it down into another harmless compound during metabolism.

I put apples, core and all, in my green smoothies. My 74-year old dad has eaten apples whole, with the core, his whole life. (He likes to point that out to whoever is within hearing range, “Hey look, I ate everything but the stem.”)

The cyanide used by Socrates’ murderer, the poison favored by German Nazis, is a synthetic chemical combined with another element — hydrogen cyanide or sodium cyanide or potassium cyanide.

In fact, the “amygdalin” made of natural cyanide and sugar, found in apple seeds, is the B17 found in other pits (like apricot) that had people lining up by the thousands in Mexican cancer clinics in the 1980’s.

My grandmother credited it, and a raw vegan “juicing” diet, with her cancer cure in that decade. 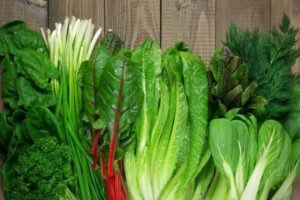 You might hear some advice to minimize or eliminate leafy greens from your diet. Don’t believe the hype!

I have done this subject to death. Like the other anti-nutrient debates, it’s another tempest in a teapot.

At issue is the claim that oxalates (found in foods like spinach, other leafy greens, vegetables, and nuts) can over accumulate, causing kidney stones and other health problems.

I do not disagree that there are a few people who are not metabolizing oxalates well (a condition called hyperoxaluria), but I’m very reticent to embrace the idea that we eliminate an entire class of foods because of it.

Greens have many critical properties that other foods do not, and these nutritional benefits are desperately needed by virtually everyone. Oxalates are one compound, of many, in a serving of spinach, and researchers looking at the anti-nutrients issue mostly agree that the benefits massively outweigh the tiny risks for a very few people, of eating leafy greens in abundance.

If you do find that oxalates are a problem, you can google “low oxalate greens” and use those, instead, in your green smoothies and salads. Avoiding greens is tantamount, however, to avoiding health. 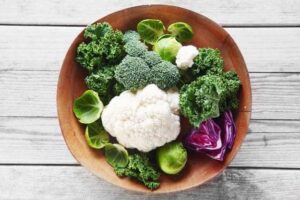 Cruciferous vegetables, like broccoli and cauliflower, are immensely beneficial to your health.

Let’s use some common sense. Let’s say a food has sustained human life for thousands of years, and dozens or even hundreds of studies show it to be dramatically cancer preventative.

(I’m referring to broccoli, cabbage, and kale — the crucifers.)

Let’s say we break down the many complex parts of the broccoli plant, over 100 beneficial compounds, and we find one that, when chemically isolated and in large amounts, could interfere with thyroid function – goitrogens.

Don’t succumb to the myth that you should avoid cruciferous vegetables if you want to avoid goiters or other thyroid conditions, even if you are hyperthyroid.  It is thoroughly lacking in evidence, and a classic example of “throwing the baby out with the bathwater.”

In fact, the studies on crucifers’ role in preventing thyroid and other cancers demonstrate precisely the opposite – they are protective foods that you want to go out of your way to eat more of! (7)

This year, I attended a conference of wellness professionals and talked with my friend, oncologist Stephen Eisenmann. I said, “Tell me the top 3 cancer preventative things anyone can do.” One of his top 3 was to eat more crucifers.

If you’ve read this article and are now going to avoid whole grains, cruciferous vegetables, or apple seeds, you’ve missed the point entirely.

Whatever OTHER food you eat instead of that whole plant food — animal flesh, or packaged foods — has far worse than an anti-nutrient or two.

They have heat-damaged carcinogenic oils, no fiber, refined sugar, chemicals from solvents and preservatives and flavor enhancers and packaging and colorings. (In fact, many packaged, processed, and animal foods also contain anti-nutrients. Almost everything does!)

Learn WHY and HOW to eat more whole foods in my FREE VIDEO MASTERCLASS going on right now.  It’s your shortcut to my best tips, getting to the bottom of the controversies, and learning to eat more of the world’s healthiest foods.

We’d prefer that you do it inexpensively, deliciously, and easily–and you’d probably enjoy that too. That’s what the video class is all about!

What other anti-nutrient foods do you want to talk about? Mention them in the comments section below!

UP NEXT: Grains and Legumes Made Easy 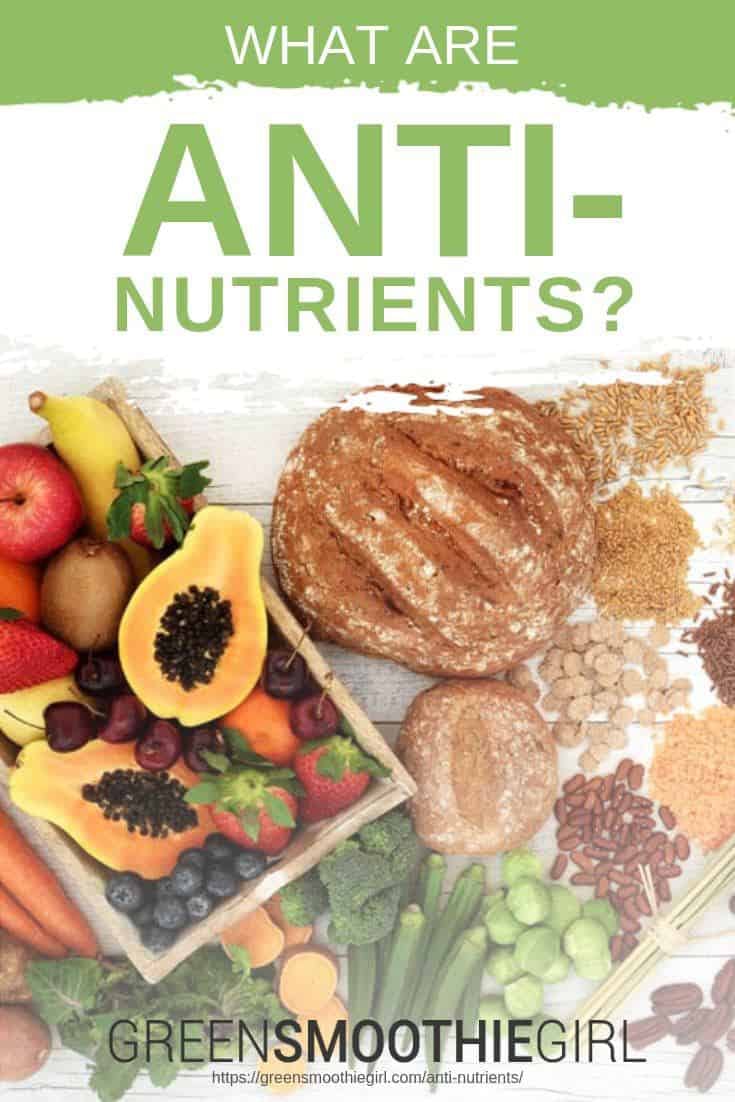 Editor’s note: This article was originally published on May 23, 2017, and has been updated for quality and relevancy. This article may contain affiliate links, which allow you to support our mission without costing you extra.

30 thoughts on “What Are Anti-Nutrients, And Should You Worry About Them In Your Food?”