My mangled face: a postscript about coconut oil

So I told you about my close encounter with concrete on a run last week.   I told you that day, at a GS class I did, one of the event organizers dabbed lavender oil on my battered face that made the swelling go way down, quickly.   Then I went home and smeared coconut oil on the wounds on my chin, lip, and cheekbone several times a day. That kept the scabs soft and helped me not worry about infection. The scabs were gone three days later and the wounds barely noticeable.

(Craig did entertain himself saying things in public like, “Do that one more time and I’ll smack you AGAIN!” And I was glad to have the end of the comments from my male friends about finding the violent boyfriend who did that and avenging the deed with a hubcap and a cheap bottle of wine.)

But while the scabs have virtually disappeared on my face, the similar-sized scabs on my knees are still ugly looking and going nowhere four days later.   This is despite that the knee scabs had not been repeatedly splitting open, like the scabs on my lip did, every time I laughed.   (I laugh a LOT.)

Okay, so the only difference, which is remarkable, is the application of coconut oil (and originally, lavender oil).   I didn’t care about my knees, whereas I did care about my face.   I took my parents to lunch today, and was telling my mom about this.   She said she wishes she had known her whole life what a wonderful moisturizer and anti-bacterial organic, cold-pressed coconut oil is–she feels she could look younger and would have saved a lot of money!   Like me, she loves it and it’s the ONLY moisturizer she uses. It’s whole foods for the skin. (Why do we buy all these products full of refined oils, at best, and chemicals, at worst?)

She loves that by applying it, it soaks in and is used as NUTRITION no differently than if you ate it.   I put so much of it on, topically, that I don’t always concern myself about getting some in FOOD every day.

Anytime I see a child with eczema, I give the parents coconut oil.   The year we began using it topically as well as internally (as food, replacing other oils, such as in baking and sautÃ©ing), eczema disappeared on me and my kids.   Ditto my circulation problems (cold hands and feet) during the winter.

Here’s a photo of me and Craig three days after my accident, 50% healed–not so bad, huh? 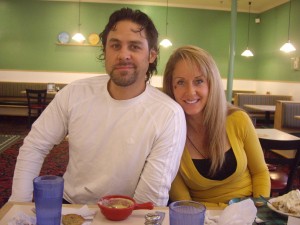 11 thoughts on “My mangled face: a postscript about coconut oil”