Tennyson has a nickname on his team. In the dugout, when he’s up to bat, they chant,

When he gets on base, they yell, “Sweeeeeet!”

I love the nickname, of course, and Tennyson embraces it. I like to yell dumb stuff like, “That was a sugar-free hit, kid!”

We’re just back from Tennyson’s team’s tournament in Idaho Falls, where they were one run short of landing in the championship. They won three games, and were up 11-1 in the fourth, when the other team made a massive rally and TIED at 12-12! (My son was the pitcher as his team fell apart, behind him, committing errors upon errors in one horrible inning.)

Lately my boys come SO close to glory, only to be robbed at the 11th hour. Tennyson sobbed all night.

I had a long convo with a dad on the team, a high school football coach, the next day when he saw Tennyson crying into my shoulder (again). He told me that’s where we learn the most, when we kill ourselves trying, but fail. So I should stop mourning things like my oldest son’s state championship loss….at the bottom of the third overtime inning, at 10:30 p.m., after five long days and 8 games of baseball. It’s the crucible of life. We learn more from loss than success.

What a great way to see it. I’m going to embrace it.

So after the game in Idaho Falls, one parent polled everybody about where we wanted to eat. I said, “Just anything where they have salads, not fast food.” Well, the decision was to go to Five Guys for burgers and fries, and they told us Café Rio was next door. Works for me!

Tennyson and I got our vegetarian salad—whole wheat tortilla, double black beans and no rice, extra greens and pico de gallo, no chips, dressing on the side. We brought it over to sit with the team in the burger joint.

The entire rest of the team, and their families, ate burgers. It’s good for me, to be around what most people eat every day, which I now find truly revolting. It reminds me to be grateful for the education I have that makes eating that stuff completely impossible now. Coagulating lard on black patties of dead cows, white flour buns, deep fried, salted sticks of fat- and chemical-soaked potato. None of it looks appealing.

I worked at McDonald’s when I was 16…..the french fries’ ingredient list was a paragraph long, with about 18 ingredients I couldn’t pronounce. Yucky. I haven’t eaten a McD’s french fry since.

Some of the parents told me they were going to take a photo of us in that place, post it on the internet, and blackmail me. Just in case, I took this photo with my cell phone of Tennyson’s Café Rio salad, and my quart of green smoothie, on the table with all the other boys’ dinners. 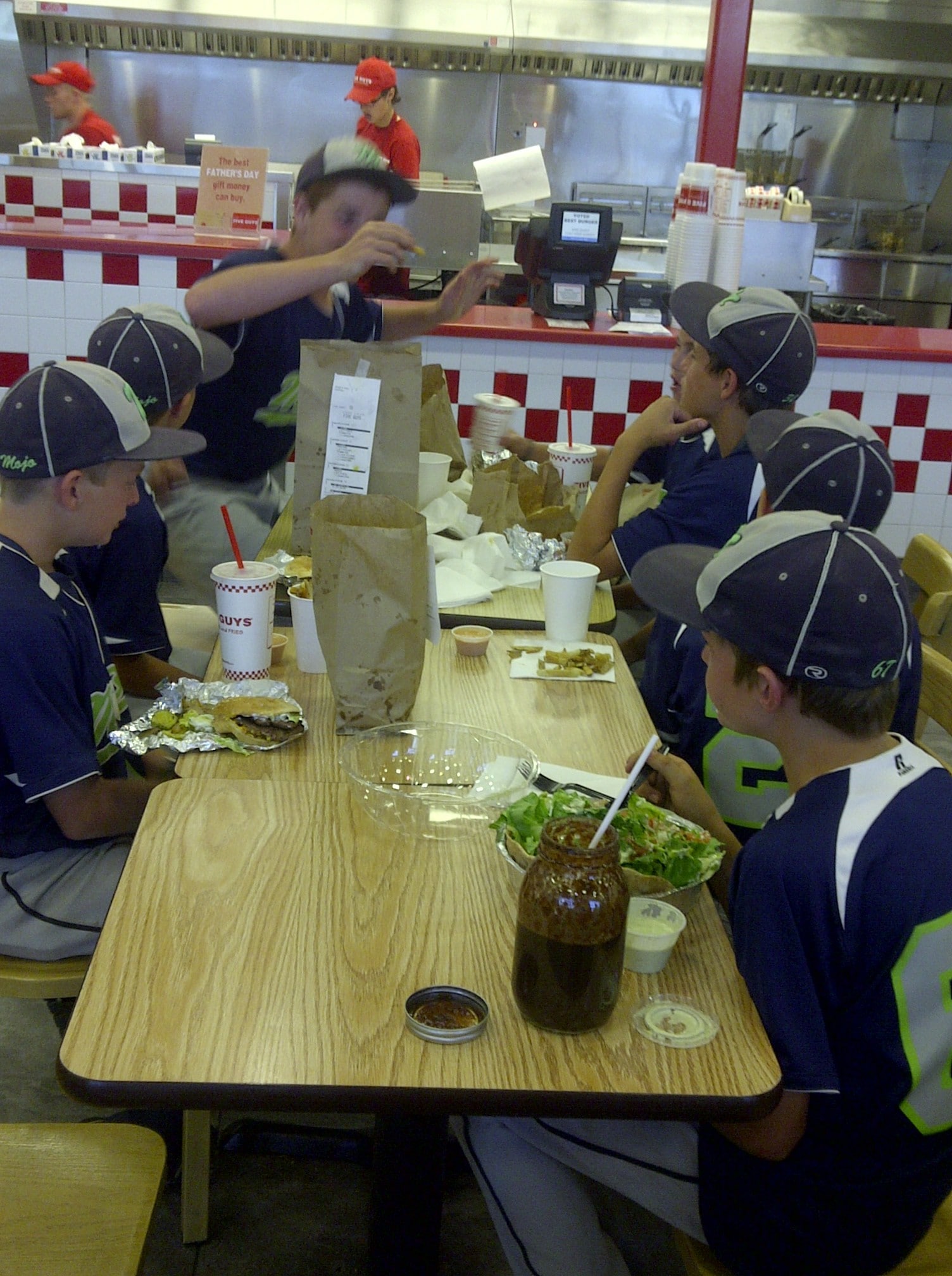 Our dinner wasn’t a dreary alternative to the good stuff. We LOVED our dinner. YUMMY. Zero deprivation. We went back and had the same thing the next night, at Tennyson’s request.

As we were eating dinner, one of the boys yelled,

“Hey Tennyson! In twenty years, we’ll all be FAT, and you’ll still be playing baseball!”

Out of the mouths of babes.