Is Supplementing With Fish Oil Really Good for You?

Nearly 19 million Americans spend over $1 billion a year purchasing over-the-counter fish oil supplements. Why? Because fish oil is rich in omega-3 fatty acids, and these fatty acids have been linked to multiple health benefits. These benefits include supporting a healthy cardiovascular system, prevention of some cancers, fighting inflammation, improving one’s mood, and even lengthening our lifespan.

But what those that have jumped on the fish-oil bandwagon may not know is that many, if not most, of these fish oils contain contaminants and toxins–and are likely rancid, too.

And research suggests that taking fish oil may not even deliver the promised benefits.

A meta analysis that reviewed over 1,000 articles and included over 20,000 patients with a history of cardiovascular disease revealed that supplementation with fish oil did not reduce the risk of cardiovascular events such as heart attacks, strokes, or congestive heart failure.1

A recent systematic review combined 79 trials involving 112,059 people with and without cardiovascular disease. Researchers concluded that taking omega-3 fatty acids, primarily through supplements, had no effect on the risk of coronary heart disease or strokes.2

That’s two major reviews of the published literature that defy the 30+ year claim that we should take literally billions of dollars’ worth of fish oil pills, to avoid heart disease.

On the contrary, omega-3 fatty acids may actually have the opposite effect. A study published in the Journal of the National Cancer Institute found that those participants with the highest concentrations of omega-3s in their blood had a 43 percent higher risk of developing prostate cancer. Researchers believe the fatty acid may cause oxidative damage to the DNA in cells, creating a fertile ground for cancer.3

Another meta analysis that included 44 studies concluded that “current evidence is insufficient to suggest a relationship between fish-derived omega-3 fatty acid and risk of prostate cancer.”4

Does fish oil cause or prevent cancer? Studies suggest that fish oil may increase the chance of getting prostate cancer.

So, just what went wrong with what seemed to be the supplement of the century?

There are several reasons that fish oil is not an ideal source of crucial nutrients. Let’s take a look at a few of the issues fish oil faces:

Polychlorinated biphenyls (PCBs) were banned in the U.S. in 1979, after they were proved to be neurotoxins, carcinogens, and endocrine disruptors.

Unfortunately, this ban came after 1.5 billion pounds of PCBs were used to make appliances, refrigerators, paints, plastic and rubber products. PCBs are slow to decompose (they take centuries to break down, if ever) and can now be found throughout the world in the air, water, soil…and fish oil.

A study reported in the Journal of Nutrition found that rats, after 9 weeks of consuming fish oil, had accumulated PCBs and OCs (organochlorine pesticides) in their fat tissue.5

A California lawsuit resulted in independent lab tests on five popular fish oils supplements. All had 10 times the state limit of PCPs.6

This class of chlorine-containing organic pollutants includes such chemicals as DDT. These compounds are proven endocrine disruptors and pose a substantial carcinogenic threat.

When researchers collected 30 samples of fish oil and analyzed them for PCBs and OCs, each sample was found to contain detectable residues of both chemicals.8

This highly toxic compound is a byproduct of herbicide production as well as paper bleaching. It is produced in burning processes such as commercial waste incineration and even backyard burning. It is considered a serious and persistent environmental pollutant that does not break down easily.

Dioxins are highly toxic and can cause reproductive and developmental problems, damage the immune system, interfere with hormones and also cause cancer.

In fact, once dioxin is in the body, it can take anywhere from 7 to 11 years to fall to half of its original level. Because dioxins are stored in animal fats, over 90 percent of our exposure comes through the food we eat, namely animal products such as dairy, meat, fish, and shellfish.9

Did you know that it can take two or more years for fish oil to go from catch to when you finally swallow it?10 That means the supplement you’re picking up from the retail shelf may well be rancid, and if it’s been sitting on your own shelf a while, it most certainly is.

Rancidity happens when the oil oxidizes, and oxidized fish oil actually contributes to many of the diseases that people take fish oil to prevent or treat. Oxidized fats increase the risk of hardened arteries, which in turn increases the risk for a heart attack or stroke.

How To Tell If Your Fish Oil Is Rancid

If the oil has a strong fish smell, or gives you “fish oil burps,” Dr. Friedman says it’s rancid. To mask the smell and symptoms, fish oil producers introduce additives such as artificial flavorings–chemicals that have been shown to cause dizziness, fatigue, headaches, cancers, and brain damage.12

Citrus oils, like lemon or lime are also common additives to mask a rancid taste or smell. Fish oils that smell or taste citrusy are another sign that they’re processed by manufacturers who know you’ll likely not be taking their product before it’s rancid–avoid those, too.

It’s also important to consider the color. Although the color of fish oil may vary depending on the species–for instance, salmon oil may appear golden-orange –all oil should, at room temperature, appear clear and not cloudy.

Deodorizing is another process fish oil producers use to reduce undesirable flavors and off-odors. This protocol involves heating the oil up to 374°F, which may lead to the formation of trans fats and the destruction of Vitamins A and D.13

The irony would be laughable if it weren’t so tragic.

As with most nutrients, I recommend getting your essential fatty acids from whole foods. Sprouted flax seeds, chia seeds, walnuts, and pumpkin seeds are all good vegetarian sources of alpha-linolenic acid, a short-chain omega-3 fatty acid that the body then converts to the longer chain fatty acids–EPA and DHA.

You can find omega-3 in plenty of food other than fish oil.

Algae is also becoming popular as an alternative source for omega-3. This vegetable from the sea contains the EPA and DHA, which offer the most potent anti-inflammatory effects.

Fun Fact: Did you know that fish are rich in omega-3 fatty acids because they eat algae? Human beings can get their omega-3’s from the same source animals do.

Algaes For EPA And DHA

Particularly good sources of algae include spirulina and chlorella. Kelp, dulse, and nori, all multicellular algae known as seaweed, are particularly easy to incorporate into your daily diet.

Arguments For And Against Fish For Omegas

Another option you may be considering is eating wild-caught, cold-water fatty fish from the cleaner ocean waterways. In addition to omega-3 fats, these fish have additional nutrients including vitamins, minerals, and aminos, all working together as a synergistic whole. The nutrients support each other, increasing the absorption rate and other benefits that come from eating whole foods rather than isolated, processed extractions.

On a personal level, I have stopped eating fish altogether. I’ve read one too many articles about various types of fish, that we once thought were healthy, found with everything from Japanese tapeworms to cocaine. And these are the wild fish caught in the cleanest environments.

One such study, published in the Centers for Disease Control, reported that the Japanese broad tapeworm had been found in wild salmon caught in Alaska. Because of this, researchers believe that salmon caught anywhere along the pacific coast of North America may be infected.14

Another study conducted at Puget Sound found 81 drugs and personal-care items, including cocaine, Prozac, and Lipitor, in the flesh of fresh-caught Salmon.15

Flax is an easy, whole-food source of essential fatty acids that has the benefit of lignans, fiber, protein, and a host of other compounds that contribute to good health.

Flax oil has the same issues with rancidity that fish oil does, since omegas are very delicate compounds that degrade quickly. Even freshly ground flax must be used quickly to keep from oxidizing, so my favorite way to benefit from flax is in sprouted form (which stabilizes the essential fatty acids), then gently dried (to preserve the enzymes) and ground for ease of use.

I use a scoop of Tri-Omega in my daily blender batch of green smoothies. It’s organic, sprouted broccoli, chia, and flax seed, which covers the bases well.

Are There Any Good Fish Oils?

If you aren’t ready to give up your fish oils, consider these aspects when choosing the one for you:

The IFOS program in Canada is a highly respected laboratory that independently tests supplements such as fish oil. Their protocol includes testing for heavy metals such as mercury and lead as well as other environmental toxins such as PCBs and dioxins.

The IFOS rates fish oil based on omega-3 concentration, oxidation or freshness, and the number of heavy metals and toxins. We recommend choosing brands with the highest rating, which is five stars. (16)

Be sure to get oil that is in a brown bottle (to block light) with no artificial ingredients or flavors, and then break open a capsule, look at its color as described in Dr. Friedman’s test, and smell it. Just as you wouldn’t eat a smelly fish, you shouldn’t ingest strong fish-scented oil. Also beware of citrus-smelling fish oil–the manufacturer is trying to cover rancidity with lemony freshness.

If you can find one, a brand that would let you overnight fish oil supplements directly from the manufacturer is probably more likely to have a fresher product than one that sells only through resalers–the length of time the product is in the supply chain matters.

Many fish oils come from fish that are endangered. Be sure to choose one that is certified by organizations that protect our sea creatures, such as the Marine Stewardship Council.

While other fish oil is highly unstable, krill oil contains astaxanthin, an antioxidant that protects it from oxidative damage longer.

Another reason krill is preferable is that Atlantic krill are comparatively plentiful, making this one of the most sustainable sources of animal-based omega-3 fatty acids.

Studies show the best results for disease prevention is a ratio of between 1:1 and 3:1 omega 6 to omega 3. In Japan, where people have the longest life spans and the lowest rates of heart disease, their ratio is 1.5:1. In the U.S., we are generally closer to 16:1.17

Why the difference? Ours is a culture that eats processed, prepackaged, and fast foods which are made with cheap vegetable oils that are high in omega-6 oils such as soy, corn, cottonseed, sunflower, and safflower. The traditional Japanese diet, on the other hand, is low in these types of vegetable oils and higher in vegetables and fish.

Getting back into balance doesn’t just require dosing up on omega-3 fatty acids, it also requires cutting back on omega-6. We do this by returning to the diet nature intended—a plant-based, whole foods diet. Ditch the vegetable oil and fried foods.

Throw out the boxes and head to the organic produce aisle.

Conclusions On Whether Fish Oil Is Good For You

What’s The Best Way To Get Omegas? Fish Oil? Noooooo….
14 Health Benefits of Flax
15 Ways To Use Sprouted Flaxseed 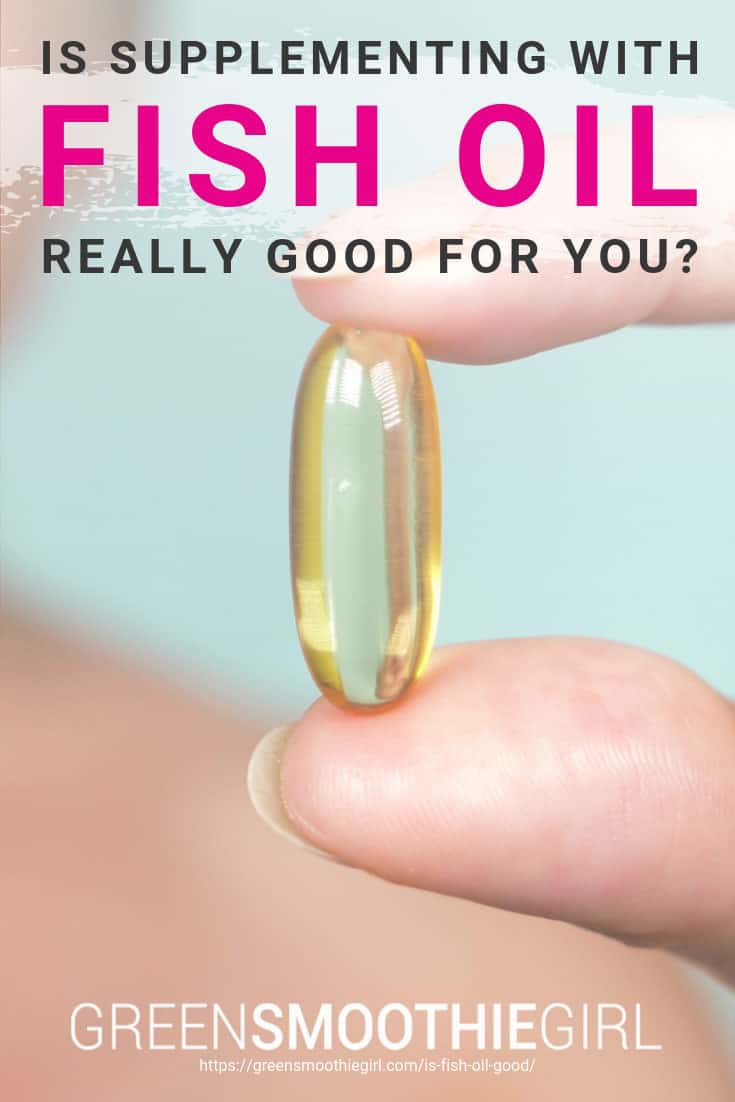 3 thoughts on “Is Supplementing With Fish Oil Really Good for You?”