Also. They have black squirrels in Toronto. The first one I saw, on my run along Lake Ontario, I thought was a genetic anomaly. Then I saw a few more.

They put extraneous vowels in words, the Canadians.

Inexplicably, they have the monarch of another nation on their currency. (Well, I GET it. Historically, I know where that comes from. But I don’t really get it—in 2012!)

Driving into Toronto at night is just breathtaking. The freeway comes in elevated, so you’re driving in, at high speed, through the middle of skyscrapers. Kristin and I were awestruck. 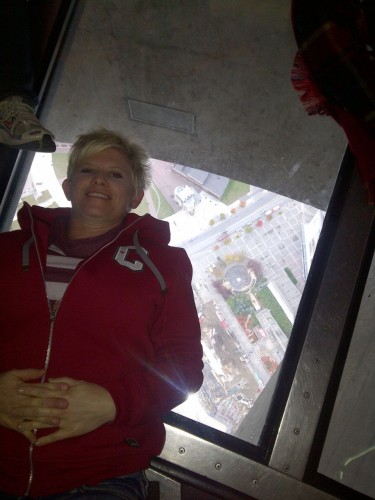 The CN Tower is the tallest building in North America. (Except the new Twin Towers currently under construction are going to be taller, which we saw a few days later in NYC.)

Kristin lay on the glass at the top of the CN Tower and I took a photo. From a safe distance, standing back from the dizzying height.

But, really, everything else looks…..very American. They have the same Taco Bell, KFC, McD’s on every corner. They have the same weight problems, and in the class I taught, the same issues with lupus, chronic pain, arthritis, cancer. And so much more misery, thanks to the second sentence in this paragraph.

I remember in Thailand climbing a thousand steps, past many Buddhist and Hindu shrines and temples, to the top of the famous Marble Mountain. There I found a local woman selling young coconuts to tourists, with a straw poked in the top. Her 2-year-old son was riding around on a tricycle. Drinking Pepsi from a can. I smiled at him and he tilted his head back and gave me the most adorable ear-to-ear grin. Revealing that all of his teeth were black and rotted.

American marketing genius knows no bounds. At times it seems to lack any moral decency, in the name of profit. Our biggest, most successful companies determined long ago to rot the teeth of toddlers in even third-world countries, introducing diabetes and cancer to populations who never knew it before.

And third-world parents let it happen, assuming that good things come from the richest nation in the history of the world.

Canadians, opt out of the worst my country has to offer. I love capitalism. We get to discern, within that sea of choices. Don’t choose our greasy, sugary, early death. It’s the underbelly of our prosperity. We’d be so much more noble and great without it.

As you can see from this photo right outside our hotel, the Westin Harbor Castle on Lake Ontario, Canadians do too far too much of what we Americans started. 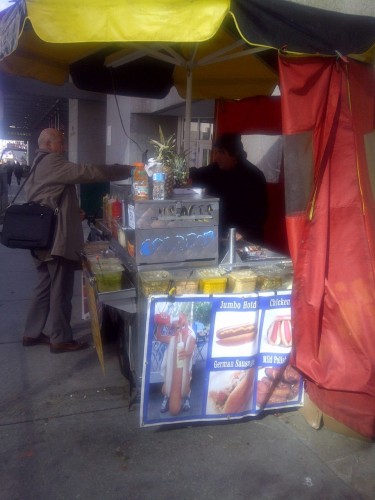